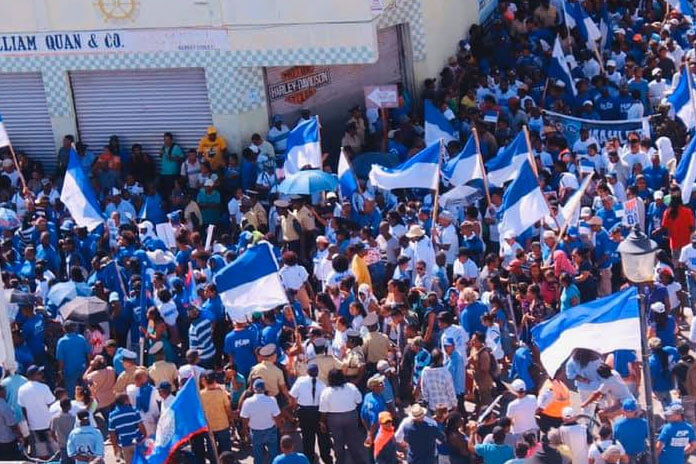 Thousands of Belizeans demonstrated against rampant corruption in the Barrow administration

The Barrow government has been buffeted by major scandal after major scandal, but the straw that appeared to have broken the proverbial camel’s back came unexpectedly out of a fraud and money laundering trial in Salt Lake City, Utah. 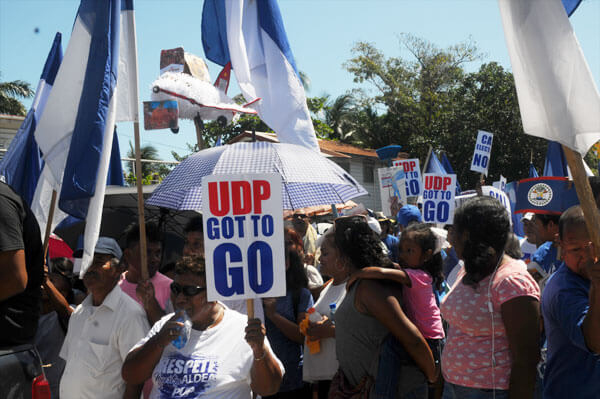 The revelation from that trial torpedoed the newly elected UDP leader, John Saldivar, less than 72 hours after he was elected by a majority of his party’s delegates on February 9.

Prime Minister Dean Barrow’s hopes of early retirement appeared to have been dashed. With elections due in November, the UDP will have an uphill battle to convince voters that it can resist the corruption which has so tainted the party, even as PM Barrow’s metaphoric two-sided sharp machete with which he was to have cut off the head of corruption appeared to have been lost.

Within a period of less than two weeks, the PUP were able to roll out an estimated 15,000 supporters in what has to be the largest gathering of PUP supporters in modern times, easily eclipsing last Thursday’s Belize National Trade Union Congress (BNTU) anti-corruption demonstration and protest. 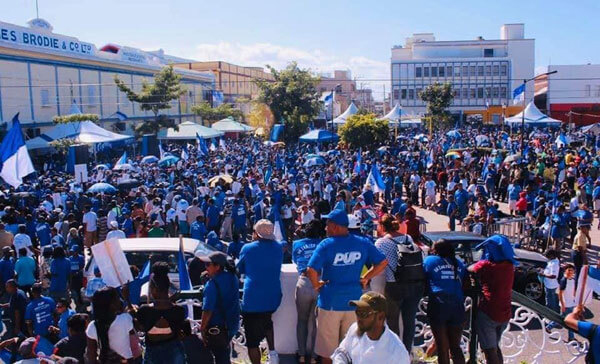 Shortly after 12:00 p.m. on Sunday, under the sun’s blazing heat, massive crowds began to march from Central American Boulevard on a route to the historic Battlefield Park to hear addresses from the PUP leaders.

The PUP anti-corruption rally got underway in earnest with Belize City mayor Bernard Wagner, who delivered an impassioned welcome address to the city.

Mayor Wager said that it is only fitting that the PUP gather in the historic battlefield Park, the enduring symbol of social resistance. “Today, we march as PUPs, but we are Belizeans…. My fellow Belizeans, it is time to fight and to resist. The Prime Minister is a lame duck prime minister and his administration is a lame duck administration. We must stand behind our leader, Johnny Briceño, when he says enough is enough…We can change this narrative today; we must call for elections now. Our campaign must not end here…change is going to come”, he said.

The next speaker, Hon. Oscar Requeña (Toledo West), declared, “We are all ready. We are going to take back this country. This is the beginning, we must work together to ensure that we bring victory to our people. So let me hear you. Are you ready? Are you ready? Call the elections now!”

Hon. Jose Abelardo Mai, PUP Deputy Leader for the North, said, “We sent three messages to Dean Barrow today. One, the unequivocal condemnation, the discontent of the people of Belize; message number two is the unified strength of the People’s United Party, and message number three: he has to address the problems that he put this country through. We want our money back! Some of them need to go to jail…” 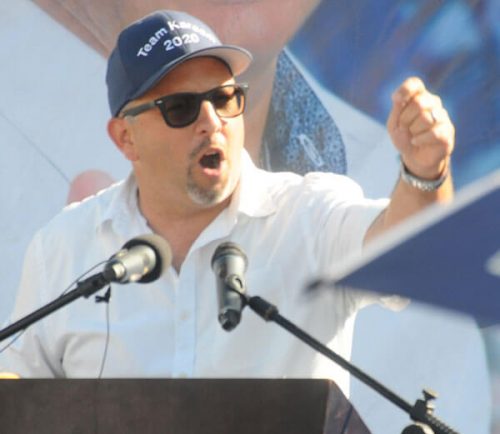 Hon. Kareem Musa (Caribbean Shores) declared: “You are so blue-tiful. There is no power greater than the power of the people.”

Deputy Leader for the South, Hon. Rodwell Ferguson (Stann Creek West), said, “Only the people can save the people.”

Anthony Mahler, PUP standard bearer for the Pickstock constituency, said, “I got some messages to share with you today … Look at this crowd. We are sending a clear message to Belmopan. Da time fu Dean Barrow and his bunch of thieves to get run out of Belmopan. I wan know if unno ready fu the war, ‘cause the war start today. Check that 1.5 billion dollars that Dean Barrow spent without permission.” 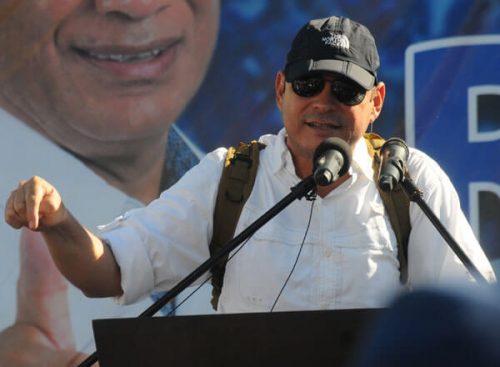 Deputy Party Leader for the West, Hon. Julius Espat (Cayo South) said, “But what is our problem, ladies and gentlemen?” He then pointed toward the Supreme Court and said, “On that building over there, the Chief Justice said that the Prime Minister of Belize acted unlawfully and unconstitutionally in the way he was spending your money. There are legal ramifications for doing that. So I am alerting the Commissioner of Police, Chester Williams, and I am alerting the DPP, if you want to have a future in this country in the profession that you chose, then do your job. All we are asking for is that you treat them like how you treated us.”

He then remarked, “Yes, we got some roads out there and some roundabouts, but how much more roads could we get if we do a proper audit to determine the value of those roads? We want an audit of the Petrocaribe money, we want an audit of the $1.5 billion dollars. We want to audit the contractors that got those works. Listen, if they say they don’t have nothing to hide and they da God pickney, then do the audit.”

“I am emotional today; I walked across a bridge and I looked and saw people crossing the other bridge, and I said, ‘I have never witnessed a congregation of people so large’,” Hon. Espat said.

“We want justice; that’s why the organization was done in front of the Supreme Court,” he explained, before leaving the podium.

Chairman of the PUP, Henry Charles Usher, told the audience, “I want you to be quiet, because I want to hear the roar coming from you when I introduce the next speaker, who has delivered the Lake Independence constituency time and time again —the Hon. Cordel Hyde, PUP National Deputy Leader.” 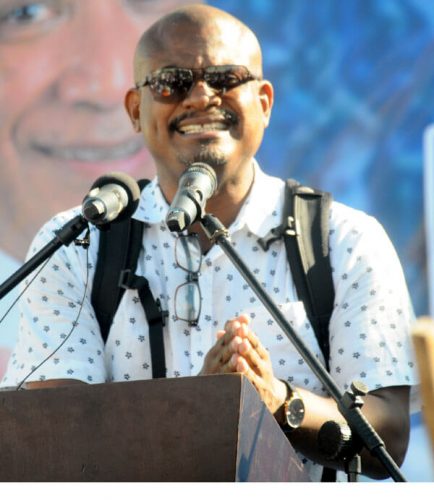 “Unno know that with this massive crowd there is no way the Prime Minister wan call di elections now, because dem know that if dem call it now or next month, dem gwine home,” Hon. Hyde declared.

“We have decided that the time to stand up is now. Ah get lee emotional Thursday when ah si the students and the people stand against the government,” Hon. Hyde said.

“Too many of our families have fallen apart over the last 12 years. Da time fu we put the country ahead of the party…Yu si, this time, da time fu mek unno eat…ministers have to understand that yu caan come in bruk and leave with lot a houses,” he said.

Hyde went on to state, “It’s about making sure the people weh fu get theirs, get theirs. I know dat some people catch feelings, because the unions no mi wan come march with us. I no ketch no feelings. I no want the unions be my friend, becaas dem da mi friends wid the UDP and now, 15 years later, dem march ‘gainst the UDP.”

“We have to understand that da wan journey. So I love Miss Elena. I love my brother, but I no wan dem be fu we friends. I want dem to hold our feet to the fire, same way,” Hon Hyde told the audience.

“Ah wan be real wid unno. We have to have a serious talk ‘bout the cost of elections in our country. I mi deh work da Amandala fu $400 a week and I still could a mi sen my pickney da school and run and win inna 1998. Who better fu represent the poor people than a poor person? But unno have to stop teck dem lee 50 and 100 dollars around election time. We can’t come back come and march 15 years from now for the same thing. So we have to fix dis business now,” Hon. Hyde declared.

Hon. Hyde said the government’s priorities are “messed up”. He cited a number of government projects which costed millions of dollars, such as the road to Caracol, Fabers Road, the access road at Mile 8 and so on.

“But we could do this together,” Hon. Hyde said, before he introduced Hon. John Briceño (Orange Walk Central), the PUP leader, as “the next Prime Minister of this country.”

Hon. Briceño went on to say, “I know the UDP’s were happy when the unions said that they were not going to demonstrate with us. Dean Barrow should also know that even the unions are tired of the UDP. And the UDP can’t say that the unions bring out the people. This is the power of the blue machine.” 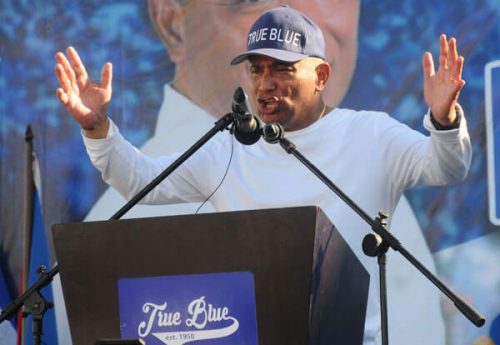 “Imagine, they cannot get a leader. The PUP have the people that have the ideas, leaders with compassion, who will not go and steal the Belizean people,” Hon. Briceño said.