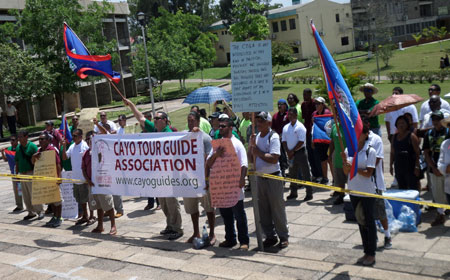 A crowd of about 60 people of the Cayo Tour Guides Association converged on the Independence Hill in Belmopan, where they conducted a protest today in front of the House of Representatives while it was in session, to denounce the death of Tourism Special Constable Danny Conorquie, who was brutally murdered in Caracol, a popular tourist site, last Thursday.

The association also delivered seven demands to the government, which included proposals to protect the forest and tour sites, and to highlight the many issues that have been plaguing the tour guide industry.

Jorge de Leon, a tour guide of the Cayo Tour Guide Association, told Amandala that their job is to take tourists to the archaeological sites, including those on the border with Guatemala – Caracol and El Pilar – and they need the tour sites to be safe, but for some time now, they said, their jobs have become dangerous.

Guatemala bandits attack and rob tourists and local visitors at the El Pilar Maya site, which is one of the best tours for bird watchers and is also a splendid Maya site. Taking tours there is dangerous because the border passes through El Pilar – half of it is in Guatemala, and the other half of hundreds of unexcavated Maya ruins are in Belize, and bandits are very active in the area.

De Leon said that when he is requested to go there, he makes it known to the visitors that it is a dangerous tour, but if the visitors  insist, he takes them, but he ensures that he have at least $20 to give the bandits when they are held up to avoid being beaten, or shot. People, however, still want to go there because it is a haven for bird watchers and the site has a splendid temple.

Jorge De Leon said that there are only two park wardens at the site, and only one gun. When they carry tourists to the sites, they are on their own, because there is no security and they cannot get help from anywhere if and when they are held up by bandits. The military only come to the area about two times a month for a quick look that everything is OK, he said, and then they depart.

He said that there are frequent criminal activities in the area, and the two park rangers are not able to stop the bandits. They have made repeated reports of such activities to police and the government, but nothing happens.

Jorge De Leon said that it is important that the security forces secure the sites, but they must keep out of sight so as not to cause alarm among the visitors.

He said that earlier this year a farmer who lives in the area of El Pilar, on his farm, was robbed. The workers and the cooks were all tied up, the solar panels were destroyed and the bandits escaped.

The tour guide said that he is expecting an increase in tax per tourist, to get the money needed to implement the security measures, but he is sure that the visitors will not hesitate to pay the extra tax for the cause.

Joe Awe, president of the Cayo Tour Guide Association (CTGA), told Amandala that tourism is one of the biggest industries in the country, and one of the biggest earners of foreign currency. One out of every four persons in Belize is affected by this industry, but they, the tour guides, are not covered. They work in dangerous situations and they now want the government to step in with finance, and ways and means to secure visitors at the border and by securing the forest.

The association’s seven demands target the government, NICH, Ministry of Finance, Ministry of Security, the Ministry of Tourism and all stake holders in the tourism industry. The demands go from simple to more complex, he said.

The demands: proper equipment and education for the security forces on the process of tours at all tour sites. The CTGA is willing to assist with this, said Awe, who added that Friends for Conservation and Development rangers, a Non-Governmental Organization, are well equipped and are even issued with night vision equipment to see in the dark, while the soldiers, in some cases, do not have boots and wear tennis shoes, and are not equipped, which leads to low morale.

They call on the National Institute of Culture and History (NICH) to train the security wardens on the sites, like what is done by the FCD.

Also, they demand that two acres of land are cleaned and cleared around the sites so that they can see clearly from a distance. He said that Caracol’s dense forest was only 100 feet from where SC Danny was stationed, and from where the bandits emerged to shoot him before escaping back into the jungle. But if the distance was cleared for about two acres, contend the Cayo guides, that would have put the bandits at a disadvantage and they would have been easily caught.

Awe said that they want military presence on the route to Caracol, Pilar and at all other tourist-based sites. They require that the security forces be equipped properly and well trained, with high morale, because the job is serious and they must be ready anytime.

Since the death of SC Danny Conorquie, many tours have been cancelled, and this represents a devastating loss of money for the guides. Awe said that he would want the seven proposals to be implemented immediately, but knows that there will be delays in the implementation.

At the end of the protest, at about 12:30 p.m., the crowd held up Belizean flags and sang the Belize National Anthem, and then dispersed from the area.

This is the second demonstration held to draw government’s attention to the neglect in the tourist industry. The first was held on Tuesday at Belize’s western border with Guatemala, where the demonstrators called for the removal of Sedi Elrington, Minister of Foreign Affairs, because he was too appeasing and not assertive enough in ensuring the rights of the Belizean people. On Thursday, the day of Danny’s killing, Elrington had told the media that he was not sure that it was Guatemalans who had actually killed the 20-year-old lawman.

That enraged the family and friends of Danny, and the greater public, who argue that all the security incidents in the Chiquibul National Park and near the Caracol Archaeological Site involve Guatemalans.

Nancy Marin, one of the organizers of the event, said that we are being invaded by Guatemala, and the response from Hon. Elrington was too weak.

However, KREM Radio reported this afternoon that Prime Minister Dean Barrow announced in the House today that the first of three military posts will be completed by October 20 in the Caracol Maya ruin area, which will be manned by the BDF and the FCD, giving some security to visitors to the site.