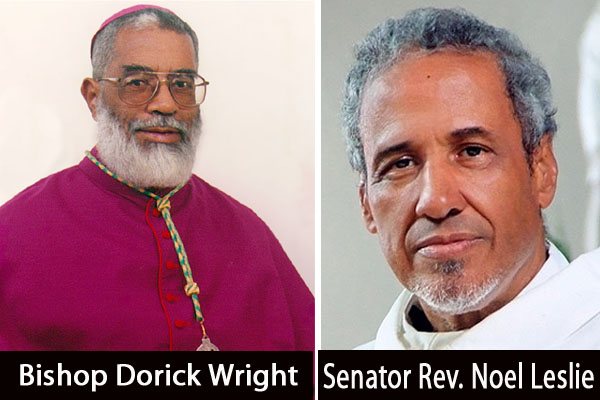 Government sneaked change to meaning of “spouse” in banking bill, already passed, to include homosexuals, etc.

The church community is up in arms over what appears to some to be an attempt by the Government to sneak a definition onto Belize’s law books that could pave the way for the sanctioning of homosexual unions in Belize. Although Government officials have told us this was not really their intent, the churches began an impassioned lobby today to ask the Government to remove the controversial clause which one representative said leads down a “dangerous road.”

Roman Catholic Bishop Dorick Wright led a delegation from the churches this afternoon, which met with Central Bank officials to speak with them about their concerns over the proposed Domestic Banks and Financial Institutions Bill. Wright was accompanied by Maria Zabaneh of the Bishop’s Council; Eugene Crawford, president of the Evangelical Association of Belize; and Scott Stern and Louis Wade of Belize Action, which has been advocating against the decriminalization of homosexuality in Belize.

Interestingly, when Amandala called Bishop Wright this morning to ask him why the churches were concerned about the banking bill and why they voted against it in the Senate yesterday, he told us that he knew nothing, because he essentially wasn’t paying attention to the matter. One man who was paying attention, though, was Rev. Noel Leslie, Vicar General of the R.C. Diocese of Belize assigned to the St. Joseph Parish in Belize City, who accompanied Wright to the Central Bank meeting.

While the churches had been generally supportive of the banking bill and were expected to give their full support for it when it was introduced in the Senate yesterday, Rev. Noel Leslie raised eyebrows when he voted against it, without specifying at the Senate meeting exactly why he was doing so.

Leslie told Amandala today that the piece of proposed legislation goes down a “dangerous road” by casting a very wide definition of spouse that would seem to legitimize same-sex unions.

“The churches have a policy against same-sex relations and at first glance when you read [the bill] you can jump to a conclusion,” he commented.

The Senator told us he could not say “yes” knowing where the churches stand in relation to the issue of homosexual unions. The definition adds to “wife” and “husband” the term “other individual,” which, Leslie said is not in accordance with how the churches see spouses. He suggested that the definition of spouse is “too open” and it needs to be fine-tuned to make the bill acceptable to them.

That definition says: A wife, husband, or other individual with whom the first named natural person is engaged in an ongoing conjugal relationship, whether common-law union as defined by section 148(D) of the Supreme Court Judicature Act, or not, and whether or not the two people are living together.

Apart from the definition of spouse, though, the banking bill is fine and they support it, said Leslie.

The Senator for the churches told us that when he read the definition last week, he felt it didn’t “gel.” During yesterday’s Senate meeting, he said, the wider meaning that the new bill attempts to give to the word “spouse” was addressed by Opposition People’s United Party Senator Lisa Shoman, and Leslie told us that he, too, was very concerned.

Shoman is a noted attorney and is, interestingly, one of the attorneys representing United Belize Advocacy Movement (UNIBAM) in their constitutional challenge against the criminalization of homosexuality in Belize.

She told Amandala that indeed, the definition of spouse in the proposed banking bill is “unusual”. She pointed out to us that it has “a much wider” meaning.

“It doesn’t limit it to a man or woman,” Shoman said, adding that the definition of spouse in the new bill is “gender neutral.”

She said that she had asked for an explanation from the Leader of Government Business in the Senate, Senator Godwin Hulse, but had received none.

Speaking with our newspaper this evening, Senator Hulse said that he just now became aware that the churches have an issue with the definition of spouse in the bill, and the Government could amend it if the churches are “making heavy weather over it.”

According to Hulse, Senator Leslie did not take issue with the definition of spouse at any time during the Senate meeting, although they could have—it was Opposition Senator Lisa Shoman who did.

Asked about the drafting of the banking bill, Senator Hulse said that the Commonwealth Secretariat had helped, but the bill was reportedly prepared by Belize’s Solicitor General Cheryl Krusen.

We understand that following today’s meeting with the Central Bank, the churches received a commitment from the Bank that it would recommend a change to the definition of “spouse” in the banking bill in line with the concerns raised by the churches. A Central Bank official told our newspaper that they will do what they can to address the concern of the churches – but they can only “recommend.”

Amandala understands from official sources that the bill has not yet been signed into law, since the statutory instrument to repeal Banks and Financial Institutions Act, the law which the new one will replace, has not yet been completed.

(See related story in this issue of Amandala featuring concerns of the private sector over the banking bill, in which they say that the law, which bolsters the regulatory powers of the Central Bank, is “too draconian.”)