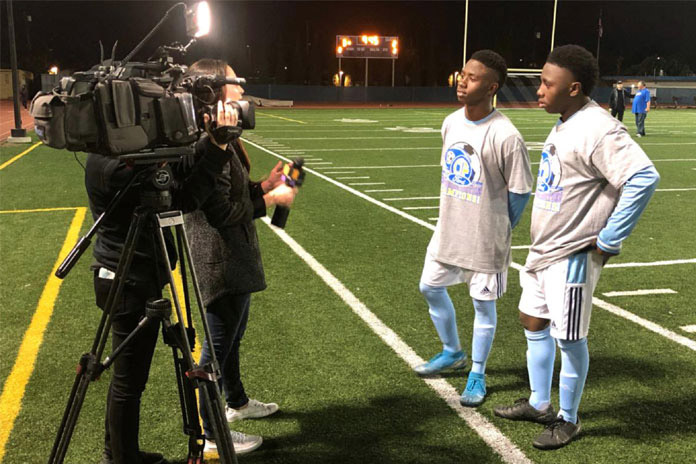 The two awesome Belizean-American teenage soccer stars contributed much in offense and defense in a highly intense match that had their team up by one when Tilar scored the first goal for his team.

Later in the match the aggressive Redlands East Valley boys, who had appeared much bigger in size and height than the Northern Torrance boys, became aggressive and pressed their offense to come back to tie the game.

A short while later, Redlands scored again, going up 2-1.

The Northern Torrance fans stormed the field and held up their heroes who made them proud in a well-played game that earned them the championship. The team will now move on across state lines to compete in the nationals. The young high school south Los Angeles soccer stars jumped for joy in celebration of becoming the champions. Officials called their names by their numbers and awarded them the “2020 CIF FORD Southern Section Champions Boys Division 3 Soccer Championship” shield. It has been the first time since 1978 that Northern Torrance High School has won the CIF Boys Soccer Championships.

Following and covering the Tilar andTilann Gill twin brother sensation for many years now since they were elementary school kids, there is a great story here for Belizeans in the diaspora. It is through the kind courtesy of their proud dad, Vern Gill, that brought this opportunity to see them play as two rising Belizean-American soccer stars now heading to college on college soccer scholarships.

Their proud mother and father, who had invested quality time in raising their two boys, celebrated proudly in their sons’ victory. And we here at Belizean Legends will feature the Belizean-American family in an exclusive feature coming soon.

(Photos through the courtesy of yours truly)