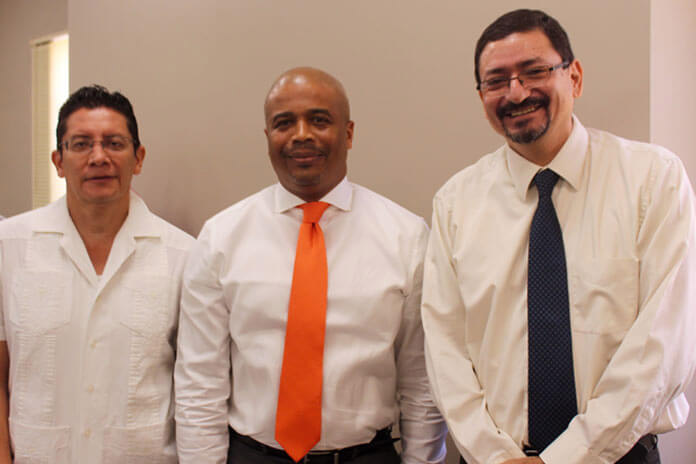 BELIZE CITY, Mon. Mar. 16, 2020– The Belize City Council (CITCO) launched its Initial Public Offering (IPO) of its 2020 Series I Municipal Paper this morning at City Hall. The bond, which had been in the making since September of 2018, required specific legislation to be tabled through the House of Representatives for it to become a legally registered and transferable financial instrument and direct debt obligation of CITCO.

Flanked by Deputy Mayor, Michael Noralez, and his councilors along with representatives of Alpha Capital LLP, Messrs. Christopher Coye and Dr. Louis Zabaneh, Mayor Bernard Wagner gave a brief overview of the purpose for the floating of the bond. Aside from smoothing out cash flow variability, the Mayor also indicated that the bond will be used to retire existing debt (suppliers credit) left by the previous council, as well as fund an interest reserve account, and provide working capital so as to enable the council to carry out projects to benefit the residents of the city.

The 2020 Series I Municipal Paper will be used to raise funds in excess of $7 million and will carry a weighted average interest return for potential investors in the neighborhood of 3.46%. According to Alpha’s Dr. Zabaneh, the offering is structured into three tranches being 91 days, 182 days and 364 days, yielding interest rates of 3.20%, 3.45%, and 3.70% respectively with automatic rollover. He went on to say that the bond offering structure is innovative, as it seeks to capitalize on the excess liquidity currently present in the financial sector.

According to Central Bank data, excess liquidity at February 26, 2020 stood at over $215 million, while excess cash stood at $172 million. This excessively liquid financial system, according to Dr. Zabaneh, has significantly diminished the banks and financial institutions’ appeal for more cash deposits, and as a result the interest payments on deposits are very low, at an average of 1.14%.

The bonds will be sold in denominations of $5,000 to both the institutional and individual investors. As protection for investors, the legislation calls for CITCO to establish an overdraft facility of $1.2 million, fund an interest reserve account with one year’s aggregate interest payments. As additional protection there is also the Set-off clause, which according to Section 10, of the Municipal Paper Act, gives a paper holder the ability to deduct the equivalent sum from any payment due to the council in respect of trade license fees or property tax due by that municipal holder to the council. The fiscal agent for the bond offering is Heritage Financial Services Limited, which was represented today by CEO Mr. Stephen Duncan. The fiscal agent will serve as the paying agent, registrar, and transfer, exchange, communications and records agent.

The bond offering, while not rated, is backed by a strong financial performance over fiscal year ended March 31, 2019, which saw the council turn an operating deficit of $844,000 to an operating surplus of $2.9 million, resulting in a turnaround of close to $4 million. According to Mayor Wagner the bond should be beneficial to investors in view of the high returns relative to the current yield by government treasury bills. He went on to say that in addition interest paid is tax-exempted, the bonds are transferable and the investment earnings are predictable.