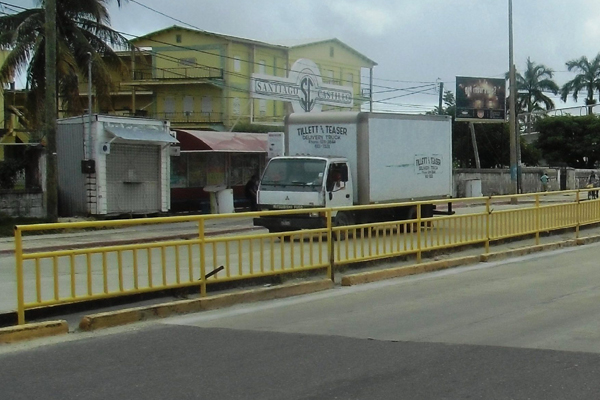 The Belize City Council has removed the crosswalks from the start of the Philip Goldson Highway near the flag roundabout during road construction in that area. The crosswalks were not replaced and that stirred up some discontentment among pedestrians and drivers who travel along that way.

City Council Press Officer Kenny Morgan said that was done so that the public could start to utilize the overpass. Many concerns were raised with regards to the safety of the overpass and accessibility to the overpass by persons with disabilities.

Referring to safety issues, Morgan said that the City Council has been looking into ways to prevent any dangerous activities occurring within the overpass. In reference to the limited mobility of some pedestrians, Morgan said that that concern was brought to the Council’s attention by several persons, including the Mercy Kitchen, which caters to quite a few persons who would not be able to use the overpass.

Morgan said the Council’s suggestion to those persons is to use the crosswalk near Save-U Supermarket over to the Farmer’s Market, walk to the one near Atlantic Bank and then cross to the other one leading to the Karl Heusner Memorial Hospital.

The City Council has had metal barriers constructed on the median from where the crosswalks were, up to the roundabout to restrict pedestrians from walking across the busy roadway. However, a few people have decided to simply jump over the barriers to cross the street.

And so far, he believes that the barriers have been helpful in preventing persons from walking across the street.

“The bars have been effective,” he said. “We are going to launch an education campaign to encourage the public to utilize the overpass. This is being done for their own safety and for the free flow of the traffic.”

Morgan said that the Council is now facing an additional problem, as persons have started crossing the highway further away from where the barriers were constructed.

“People are now crossing the highway near Courts and the other businesses along the road, and that practice is dangerous for both the pedestrians and drivers,” he said. “Even students are doing it, and this is very dangerous. The overpass is right there to provide access for the public [to] get over to the other side,” he noted.

Morgan said that the Council is requesting of the public that that practice of walking across the highway be stopped, and encourages the public to use the overpass for their safety.