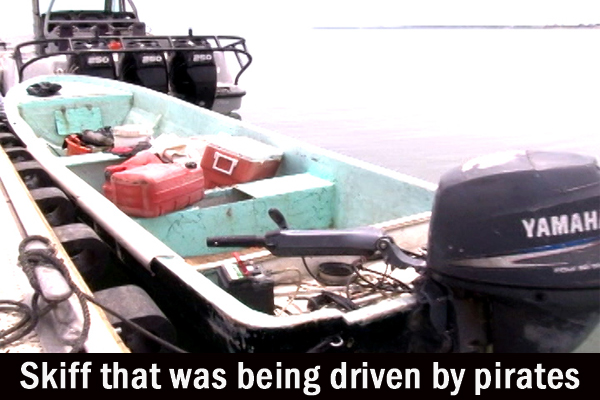 There was a dangerous confrontation that occurred just after midday yesterday in the waters located 20 miles southeast of Belize City after five fishermen made a desperate call to the Belize Coast Guard alerting the authorities that they were in the process of being robbed by three men, two of them Hispanic and one of Creole descent.

The Coast Guard officers responded immediately and upon reaching the scene, they spotted the robbers – who were in a mid-sized skiff with a 50-horsepower engine registered as Dannica – and set chase, but the combative assailants reportedly refused to be apprehended without a gunfight, which ensued while they were being pursued by the marine officers.

Amandala understands that the would-be robbers fired several shots at the Coast Guard, who responded similarly with gunfire in a high speed chase and shootout that reportedly went on for two and a half hours until the bandits were finally cornered and detained near the reef.

Today, we spoke to the Coast Guard’s Fleet Commander, Lieutenant Greg Soberanis, who recounted the incident and told us how they managed to intercept the pirates.

He said, “Piracy at sea is becoming more and more frequent in Belize’s sea spaces, and yesterday was another such case. Just after midday we received a call from some fishermen that they were being robbed of their products by some local pirates, and that the individuals had fled to the area known as Middle Long Caye.

“We immediately deployed our Quick Reaction Team, who went on the scene and were informed by the fishermen that the men were hiding in a creek in Middle Long Caye. The patrol team conducted a quick search of the area and while doing the search, they sighted a vessel that fitted the description of the one being driven by the pirates.

“As the Coast Guard approached the vessel, however, the men fled close to the reef, just south of English Caye. A hot pursuit ensued and the pirates began to conduct evasive maneuvers to elude the Coast Guard. This went on for quite some time until the vessel became dead in the water, meaning it came to a complete stop.”

At that time, Soberanis stated, the Coast Guard personnel believed that the pirates had surrendered, but it turned out that they were actually being lured into a trap.

Soberanis explained, “We thought that the vessel had either experienced engine problems or had run out of gas, but this was not the case. Actually, they were luring us into a position to engage us, which they did, so shots were fired and the Coast Guard patrol took cover and subsequently returned fire at the said pirates.

“The vessel again fled and conducted evasive maneuvers once more. The occupants on the vessel then decided that they would make a run for Middle Long Caye, which was in an open area, and that gave the Coast Guard patrol an opportunity to intercept the vessel, because previously, all their evasive maneuvers were being conducted in the shallow parts of the reef.

“As they tried to escape into a creek near Middle Long Caye, we intercepted the individuals and the three occupants on board were detained, brought to headquarters and were handed over to the police to be processed.”

Thankfully, no one was injured during the treacherous game of “cat-and-mouse” through the shallow channel. However, Coast Guard officers hit the small outboard engine of the skiff twice after its occupants had opened fire on their Boston Whaler during the shootout, which eventually led to the arrests of the men.

Soberanis noted that the men who were detained – identified only as Giovanni Murillo, Teck and Sedacy – are no strangers to the Coast Guard or to the fishing community because they (the Coast Guard) have received numerous complaints that those same individuals had been looting products from fisher folk and harvesting illegal lobster, which they sell across the border.

Soberanis mentioned that when they sensed that they were going to be caught, the assailants dumped all their weapons and illegal products overboard.

He told us that they are aware of an increasing number of criminal elements which are involved in sea piracy, but they are coordinating their efforts with other maritime law enforcement agencies such as the Fisheries Department, the Port Authority and the police to curb those types of crimes, and to ensure that the sea spaces in Belize remain safe and secure for those who make a living from the sea.