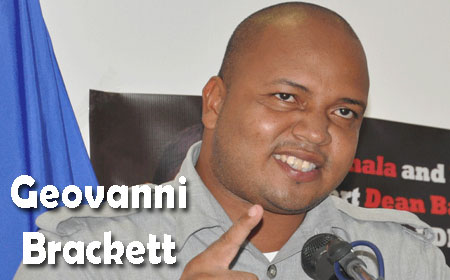 BELIZE CITY Thurs. Aug. 27, 2015–The activist grassroots organization Citizens Organized for Liberty through Action (COLA) this morning launched its response to the government’s delay in the construction of a Forward Operating Base (FOB) on Sarstoon Island under the banner “Protect Belize: Build the base now,” at a press conference that was broadcast live from the Radisson Fort George Hotel.

Around the end of May, there was a standoff around Sarstoon Island between elements of the Belize Coast Guard and the Guatemalan Navy. The government later reported that Guatemala had objected to the construction of a military base on the island until their territorial claim is adjudicated at the International Court of Justice.

Foreign Affairs Minister Wilfred Elrington had said that Belize and Guatemala were scheduled to discuss the matter at the Organization of American States.

Last week Wednesday, at the Prime Minister’s press conference, however, BDF Brigadier General David Jones said that Sarstoon Island was unsuitable for constructing the FOB, and they were looking at building the base on higher ground.

The moderator for COLA’s press conference, Patrick Rogers, before introducing the first speaker, said, “Government is not serious. They have yet to show us a viable plan for building the base.”

The first speaker, Rufus X, described the military leaders of the BDF and the Belize Coast Guard who sat at the head table with Prime Minister Barrow, as being political “sissies” who were talking “bull.” “If they cannot handle mosquitoes, how they will handle Guatemalans,” he said.

“Why do they want high land to put our soldiers; our soldiers are equipped to go anywhere,” Rufus said, adding, “They are trained for war, and war is hell; if a soldier can go to hell, he can go anywhere.”

The poet known as “River of Fire,” who has been designated as the link between COLA and the Belize Territorial Volunteers (BTV), took to the podium and said, “We need to get serious.”

“The Prime Minister said that he sent a strong note of protest to Guatemala, but within two seconds of saying that, he turned right around and said the Belizeans who went down there [Sarstoon Island] were patriotic,” River of Fire said.

“He said if we ever go back again, he still would not protect us, so Belizeans need to open their eyes. We need to reject the policies of this government, protect Belize and build the base now,” said River of Fire. “We want to revisit the Maritime Areas Act, everything, and get Belizeans united behind this issue,” he remarked.

COLA president Giovanni Brackett said it is clear to see that the Government of Belize is made up of practiced liars and deceivers.

Brackett said bilateral agreements between Belize and Guatemala were signed and there was not a word to our citizenry.

Brackett said that many in the Coast Guard, the BDF and the police are upset with the Prime Minister and the Foreign Minister for not protecting the BTV. They should have been escorted.

Brackett pointed out that the government has kept it a secret that the Guatemalans had been hostile to the BDF and the government did not want the BTV to make the expedition, knowing that this would be exposed. Guatemala clearly did not just decide on Sunday to guard that area. The Prime Minister tried to whitewash the issue of our sovereignty over the Sarstoon Island, but it won’t work, he said.

“Our territory is not safe, Prime Minister, because you made it so by not taking the actions you should have taken years ago. Protecting the BTV in the Sarstoon should be no different from protecting them anywhere else in this nation. The assertion that the BTV’s action has given rise to a chain reaction from Guatemala is disingenuous,” Brackett said.

“The reality of the inactivity of our government can be described as dereliction of duty,” Brackett pointed out. “We should have had a base in that area long ago. We should have been training our men and women in uniform how to protect our borders,” he stated.

“If we are stirring up war with Guatemala, it is because they have pushed us first, buoyed by the appeasing nature of our government,” said Brackett.

Brackett said, “We predict Belize and its diplomatic note will be ignored, the same way the Guats stopped the OAS at the mouth of the Sarstoon. It took the Government of Belize three whole days to side with its citizens that we were in Belize territorial waters.”

Brackett demanded, “COLA is calling for three things: one, to build the base now, not after you try to win elections, but to build this base now. We can talk about Petrocaribe is rolling, but definitely Petrocaribe is not rolling at the border.

“Further delay of building this base would give rise to what we call ‘justifiable suspicion.’ If this base is not built, we have to ask, what is the reason why they can’t build the base? Is it because they have been compromised?

“Three, it is time for us to revisit every agreement with Guatemala that has been signed.”