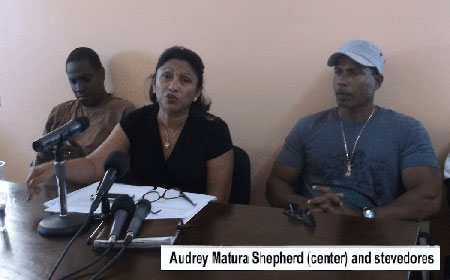 At that meeting, president of the Christian Workers Union, Audrey Matura-Shepherd, informed the media that with the stevedores’ input, they have formulated a Collective Bargaining Agreement (CBA) for the stevedores.

Shepherd said now they are ready to go back to the negotiating table with the Port Authority’s negotiation team. She went on to say that the stevedores have been operating without a CBA for 11 years.

Presently, there are two memorandums of understanding, a framework agreement and two addendums to that framework agreement; but these cannot be used to address issues of the stevedores holistically, said Shepherd. “We are glad that we were able to formulate a CBA and will work on incorporating it in, our meeting with the Port Authority’s Management”, she said.

Sean Middleton said that the stevedores, who unload containers of goods that are brought into the country on ships, engage in long hours of hard labor. The stevedores have 8 gangs that take turns in carrying out the shifts, so a stevedore doesn’t have a regular workweek. After a stevedore, completes his  turn in unloading ships, he does not work on ships again until 38 days later, and it is because of the infrequency of their work that they have received poor or very little benefits, he explained. The Collective Bargaining Agreement will allow for better benefits to be put in place for these workers, he said.