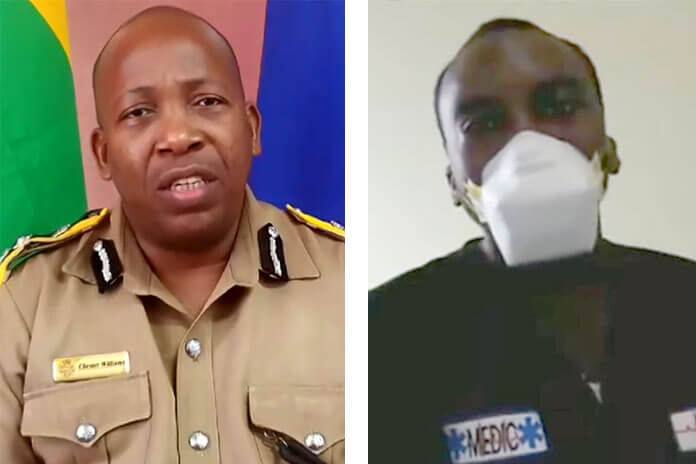 BELIZE CITY, Tues. May 12, 2020– Commissioner of Police Chester Williams is demanding an apology from a Southern Emergency ambulance driver, now identified as Leon Caliz. Police said that on Sunday, they had received information that a driver was being held at gunpoint by criminals in the ambulance, and he was being forced to transport guns and drugs to Belize City, from the southern districts.

Police said that after they received the information, they made two attempts to stop the ambulance that was speeding along the Hummingbird Highway to Belize City from Hopkins, Stann Creek District, to deliver a patient from Independence to the Karl Heusner Memorial Hospital.

According to police, the driver sped past the two roadblocks, giving police the impression that indeed, he was really under distress and being held captive.

Heavily armed policemen then set up a roadblock in Hattieville by using police vehicles to block the road, and the officers stood armed and ready. The ambulance driver then stopped at the roadblock, and the ambulance was given a quick check by the police, who verified that there was no one onboard except a sick man, his companion and a paramedic.

The ambulance was allowed to proceed to the Karl Heusner Memorial Hospital and a deadly showdown was avoided.

Compol Williams, in a police brief on Monday, said that the entire situation could have been avoided if the driver had just stopped and told police that he was carrying a patient and was not being held at gunpoint. He said that driving through a police road block is unacceptable, and an ambulance driver is not above the law, and that police can stop an ambulance, just as it stops any other vehicle.

Williams asked what would have been the public response if the report was true that the ambulance had been hijacked and the driver was indeed being held hostage and was later found dead. He wants an apology from the driver.

On Facebook, the managing director of Southern Emergency Company said that they would like to  make it known to the public that their medics are well-trained, and are also trained to work with police, and that they are pleased with the actions taken by the driver of the ambulance, because his action was in the best interests of the patient, and that they regret the action of police at the Hattieville road block.

Southern Emergency Company said that the driver acted appropriately under the circumstances, which resulted in the patient being delivered safely at the Karl Heusner Memorial Hospital.

In speaking on PLUS TV News, the driver, Leon Caliz, said that they got a call from Independence to take a patient to the Karl Heusner Memorial Hospital and he was transporting the patient in the ambulance. He said that the ambulance was stopped by a plain-clothes policeman who waved them through, and again when he arrived at Cotton Tree, they were waved through.

The company said that at no time did police call and ask them anything, and that the company was not aware of the information given to police that the ambulance was transporting drugs and guns, and they have no idea from where such information came.