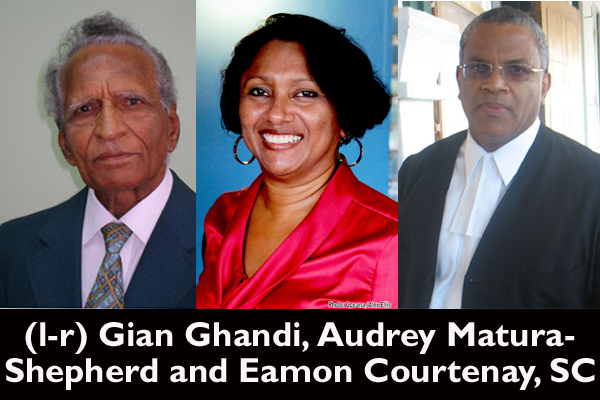 The proposed changes to Belize’s Criminal Code will this week be reviewed at a third House Committee meeting—this time being held with key legal authorities in Belize who will provide invaluable technical input to refine the proposed amendments.

The Constitution and Foreign Affairs Committee, headed by Education Minister Patrick Faber, is leading the review of the bill before it goes back to Parliament. That committee is slated to meet Wednesday evening at the National Assembly, and the Belize Bar Association, the Attorney General’s Ministry and the Office of the Director of Public Prosecution (DPP) are due to be present at that meeting.

Attorney Audrey Matura-Shepherd has highlighted a number of concerns about the proposed amendments to Belize’s Criminal Code – one of them being the removal of the offense of marital rape: a provision under which a man could be charged for raping his wife, particularly in the event of spousal abuse.

Government’s Legal Counsel Gian Ghandi told Amandala that he, too, has highlighted concerns on the issue. Ghandi said that under the proposed provisions, section 46, which includes marital rape as an offence, would stand repealed and replaced with a new definition of rape which does not mention marital rape.

Ghandi pointed to several flaws in the new definition of rape. Among them is that it does not cover sexual offenses committed by women against men, particularly against young children, apart from the omission of a provision to cover marital rape.

This, Ghandi said, would result in a duality—muddying the waters, since there are existing provisions that define circumstances that could be deemed marital rape, such as in the context of aggression and spousal abuse, or in the context of a separation between spouses.

“The new bill, if not properly amended, will prove to be the lawyers’ nightmare,” he opined.

Eamon Courtenay, SC, president of the Belize Bar Association, has raised similar questions. He points out that the existing Criminal Code, section 46, also created the offence of marital rape and set the punishment for it. However, in the proposed amendment, there is no mention of marital rape in the replacement, he noted. He questions whether the intent is to dispense with the offence altogether.

In making certain sexual offenses gender neutral, there are more concerns. Courtenay questioned the possible adverse effect of the change from unlawful carnal knowledge to unlawful sexual intercourse – in a manner which would make both parties culpable, whereas the current provisions make only the male culpable. He said that the change would mean that two minors could face charges if they engage in sexual intercourse with each other. It would then raise the question of whether parents would be willing to file a police complaint knowing that their child, too, could face criminal penalties.

Courtenay notes that whereas the new provisions would stiffen penalties for certain sexual offenses, they would actually reduce penalties in other instances, such as incest and kidnapping.

Like others we have spoken with, Courtenay expresses concerns that the Bill is really not easy to read, and contains multiple grammatical and construction errors.

He notes that while the Criminal Code (Amendment) Bill has been modeled off of the UK Sexual Offences Act 2003, simply importing it into Belize laws has posed some difficulties.