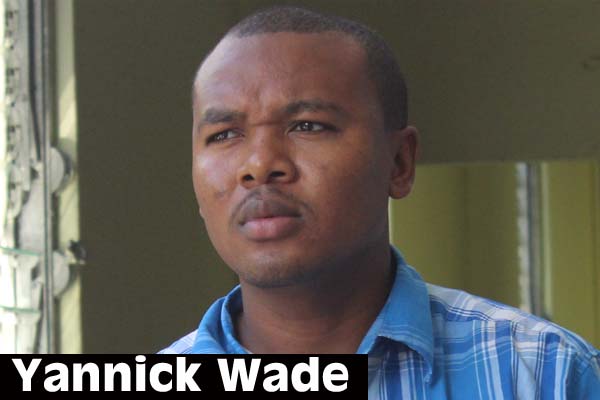 A Belize City policeman, Yannick Wade, 27, who was posted in San Pedro, gave the Police Department another unneeded black eye just a week after another cop, special constable Jose Haylock, 36, was sentenced to five years in prison for possession of unlicensed firearm and ammunition.

On Friday, May 2, a search by police officers, during which Wade and his in-laws were present, recovered two out of eight .38 revolvers that were reportedly stolen from a metal safe inside the San Pedro Police Station, where the security company, KBH, had stored them for safety. The company also reported that 101 rounds of its .38 ammunition that were inside the safe were also stolen.

Constable Wade spent the weekend in police custody after he was arrested and charged for the theft of the revolvers and ammunition, which were found at his in-laws’ house on Cemetery Road.

In an unprecedented show of their displeasure with Wade, the police brought their comrade to the Belize City Magistrate’s Court in handcuffs on Monday afternoon.

But Wade’s arraignment was delayed until almost the end of the work day, because all of the magistrates were busy in a meeting.

Shortly before 5:00 p.m., however, Wade, after his attorney, Audrey Matura-Shepherd, had left, was arraigned before Chief Magistrate Ann Marie Smith on 13 charges.

Police charged him with nine counts of theft — eight for the missing firearms and one count for the 101 stolen rounds.

Wade was also charged with two counts of “kept firearm without a gun license,” in connection with the two .38 revolvers police recovered on Friday. One of the guns reportedly was found in the ceiling, and the other was found among some old vehicle parts.

In addition, Wade was also charged with two counts of “kept ammunition without a gun license” for eight rounds that were loaded inside the two revolvers — one gun had six rounds and the other had two rounds. The eight rounds in the two guns were included in the theft charge for the 101 stolen rounds.

The police press release, however, failed to mention the specific location where the two guns were recovered. But Amandala learned that they were recovered at a house on Cemetery Road in Belize City, from which all the occupants were taken into police custody, including Wade’s pregnant girlfriend.

All of the other persons taken into police custody on Friday evening were released without being charged.

The Chief Magistrate remanded Wade into custody until his next court appearance date, June 25.

According to Superintendent of Police Luis Castellanos, the officer in charge of San Pedro Police Station, Wade was fingered after they had done an elimination process of the officers present at the station during the time the theft occurred.

Wade was the only officer to leave the island. He told his sergeant that he was ill from food poisoning and requested leave.

“The padlock, which was a flimsy lock, was tampered with,” Castellanos told Amandala in a telephone interview Monday evening.

He said that eight surveillance cameras are now installed inside the station, donated by a businessman, Edmond Chi, who is the owner of Geeks Computer Shop.

Castellanos said that the Commissioner of Police will have to decide whether or not the police will continue to provide the service to KBH Security.

The guns and ammunition were discovered missing on Friday, May 2, when KBH’s Daniel Tun came to pick them up, and he reported the theft to police.

Wade, who has been in the Police Department for four years and had worked at the Belize City Crime Investigation Branch, was transferred to the San Pedro Police Station in April of 2013.

Prior to his transfer, Wade was on interdiction pending the outcome of a carnal knowledge case in the Supreme Court. He appeared before Justice John Gonzalez in February 2013.

But the case ended when the prosecutor had to enter a nolle prosequi, because the main witnesses in the case had failed to show up in court and could not be located.

The allegation against Wade in that case is that on six different occasions he had sexual intercourse with a thirteen-year-old minor between June 21, 2009 and March 2011.

The minimum sentence upon a conviction for a firearm offense is 5 years, under the new amendment to the Firearm Act.