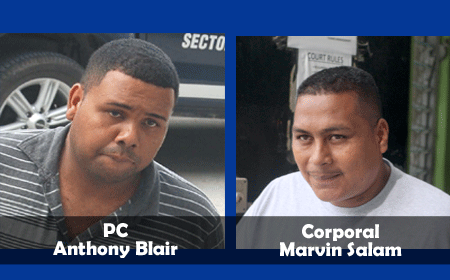 BELIZE CITY, Wed. July 19, 2017–Two police officers who had been arrested and charged with extortion, were brought to court today by Crimes Investigation Branch police officers so that they could be arraigned on the charge.

Corporal Marvin Salam, 37, and Constable Anthony Blair, 28, both pleaded not guilty to one count of extortion when the charge was read to them by Magistrate Carlon Mendoza.

There was no objection to the offering of bail to the two accused cops and Magistrate Mendoza released them on bail of $3,000 each plus one surety each in the same amount.

Corporal Salam and PC Blair are scheduled to return to court on September 27.

The two accused cops are stationed at the Racoon Street Police Station. It is being alleged that on Saturday, July 15, they stopped a car in which three young persons were traveling, and they allegedly found some cannabis seeds behind the driver’s seat, and a white substance was found on a piece of foil in the car.

Hermant Bhojwani, a Belizean student and resident of Albert Street, was in the car, along with Gabriel Taylor and Chelsea Mitchell, and they were heading toward Central American Boulevard, court records reveal, when they were stopped by the two police officers at a police checkpoint.

They had agreed that the place of meeting where they would collect the money on Monday would be at the corner of East Canal and Church Street.

Instead of collecting money, however, the officers were detained and charged.

At their arraignment, Salam and Blair were represented by attorney Dickie Bradley.