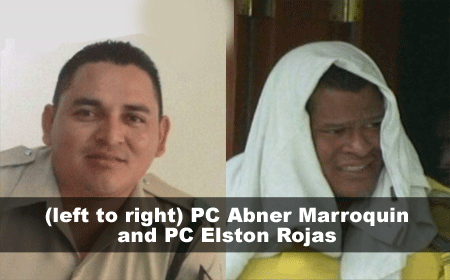 BELIZE CITY, Mon. Apr. 10, 2017–Less than a week ago, an Orange Walk police officer was interdicted from duty after video footage emerged showing that he was the driver of a police mobile used to transport suspected contraband beers from Botes, Mexico to Belize.

Now today, Monday, three Corozal policemen are in trouble after Customs officers from the northern border station revealed video footage suggesting that they too may be engaged in facilitating the movement of contraband goods into Belize.

They took the bag to the Corozal Police Station, where it was opened and found to contain assorted slippers, socks and underwear.

An official police report has identified the driver of the police vehicle as Police Constable #885, Elston Rojas, and the vehicle commander as Police Corporal #263, Abner Marroquin.

The Commissioner of Police ordered an investigation, after which both officers were charged with prejudice to goods order, discipline and interdiction from duty.