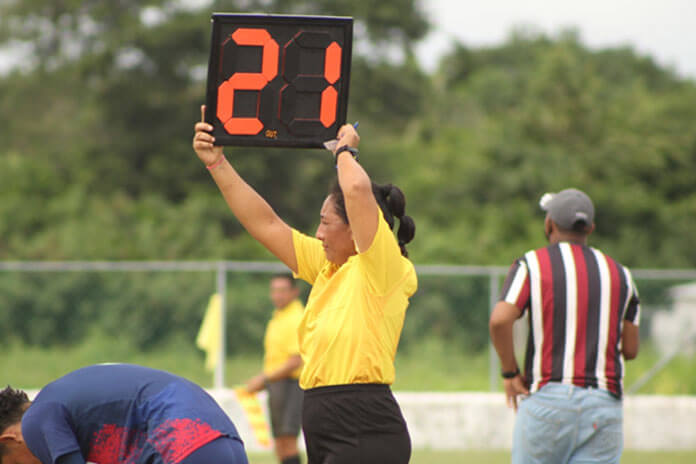 COROZAL TOWN, Mon. Nov. 15, 2021 — The Corozal Football Association (CFA) 2021-22 Opening Season continued over the weekend with 5 games in Week 2 of the Amateur Tournament. Two games were played on Saturday and three on Sunday at the Ricalde Stadium.

With established protocols, only approved players and technical team were allowed. Upon arrival all must go through sanitizing of hands followed by body temperature check and verification of vaccination cards. Once this process is done, players are allowed to go to their respective changing rooms. Upon whistle blown marking the completion of the game, both teams have 15 minutes to exit the premises, which is being overseen by the Police. These protocols are set in place as the current Statutory Instrument does not allow fans, and the approval granted to CFA is for closed-door games. Bearing that in mind, CFA took one step forward and is streaming all our games live through our Facebook page.

In game 1 on Saturday, San Pedro Jaguars got the 4-2 win over Cristo Rey Youngsters. Goals for San Pedro Jaguars were by Enrique Chan (15’), Elioni Cawich (36’ & 50’) and Axel Perez (73’); while Cristo Rey Youngsters’ goals were by Orlando Perez (5’) and Treymayne Blades (10’). And in game 2, it was Corozal United Ballers gaining the 3 points from a 1-0 victory over Corozal Legacy with a goal from Shedrick Raheem Swaso (26’).

On Sunday, the first game saw Calcutta Strikers shutting our Club Atletico Tempestad, 5-0, with a goal apiece from Basil Sutherland (16’), Jervis Ara (20’), Luis Sanchez (28’), Darnel Mossiah (68’) and Israel Ara (82’). In the second game, Calcutta Bulls dropped Corozal Pelicans FC, 2-1, with a goal each from Gregory Banner (41’) and Joshua Villanueva (45’); while Rickelmer Garcia (93’) scored for Corozal Pelicans. And in the final game of the day, San Antonio United and Concepcion Consentidos played to a 1-1 draw. Alexis Mendez (47’) put Concepcion Consentidos in front, but Elvin Williams (89’) got the late equalizer for San Antonio United.