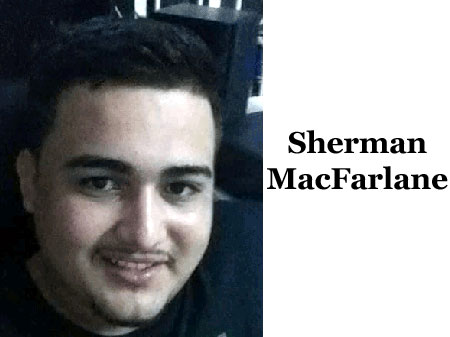 LIBERTAD, Corozal District, Wed. Nov. 16, 2016–Sherman MacFarlane, 22, of Corozal Town, who was unemployed, died after a gunman ambushed and shot him in the head at about 9:30 last night on Cemetery Road in Libertad.

MacFarlane was found near his vehicle bleeding from gunshot wounds in the head.

Police said that MacFarlane was hanging out with five friends in Libertad yesterday, and afterwards, he was crossing the road to get into his vehicle when four men came out of the bushes. They were all wearing masks on their faces and one of them walked up to MacFarlane and shot him in the head.

Police said that they found a 9mm expended shell at the scene, but could not find MacFarlane’s assailants.

Superintendent Dennis Arnold, Commander of Corozal police, said that MacFarlane had been involved in an argument which led to a misunderstanding with a man in Libertad on Monday, and the man began to threaten him, but the incident was not reported.

Commander Arnold said that on Tuesday, MacFarlane and three of his friends who were 6th form students travelled from Corozal Town to Libertad to spend time with their two friends, who were also students.

At the end of the visit, MacFarlane and his friends were going back home to Corozal Town. While his two friends were saying their goodbyes, he walked across the road to open the vehicle.

MacFarlane was thus shot and killed in front of his friends.

The Commander said that MacFarlane was not known to police.

One man has been detained for questioning in connection with the shooting. The motive for the murder is not yet known.

Police said that they are also looking for the man with whom MacFarlane had been involved in an altercation. His friends said that MacFarlane was easygoing and friendly, and they don’t know of any reason why anyone would want to kill him.

Anyone who has information that could help the investigation is urged to contact the Corozal police at 422-0022 or the nearest police station.