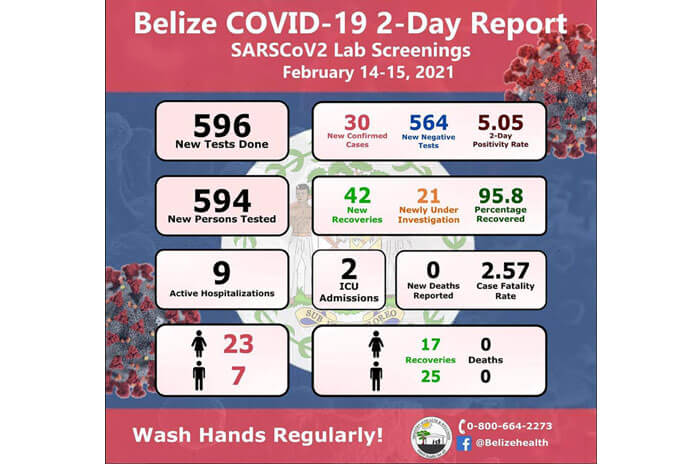 BELIZE CITY, Mon. Feb. 15, 2021– The COVID-19 epidemiological curve in Belize has flattened considerably since late 2020 when we had thousands of cases across the country. Since our last update, no new death related to COVID-19 has been recorded. The daily infographic reports are recording new cases in the single digits in all the districts, and COVID-19-related deaths have become far less frequent. The Government of Belize continues to urge all Belizean citizens to strictly adhere to all the prevention and isolation measures that are in place.

Currently, officials from the Ministry of Health and Wellness are finalizing the COVID-19 vaccination plan that will be rolled out across the country following an education campaign. During the last sitting of the House of Representatives, Minister Chebat pointed out that vaccines will soon arrive in the country, through our partnership with the COVAX facility.

In a recent interview with local media, Prime Minister John Briceño mentioned that he had reached out to the Prime Minister of India, Narendra Modi, in an effort to access even more doses of life-saving vaccine. Of note, India has become the country leading the charge to ensure access to vaccines across the world through the distribution of a vaccine that was produced at one of its own local facilities.

The recent COVID-19 data in Belize shows that there have been a total of 12,175 cases of COVID-19 in the country since the start of the pandemic in Belize. Of that number, 194 cases remain active across the country and about 11,668 persons have recovered. Our fatality count stands at 313, which equates to a case fatality rate of 2.57%. At this time, 83 women and 111 men are actively infected with COVID-19 in Belize.

Cumulative data from February 14 and 15 show that 30 new cases were discovered after a total of 596 tests were conducted. A total of 42 recoveries were recorded in that time period, and 9 active hospitalizations of persons infected with the virus were listed. Two of those persons needed intensive care. No death was recorded during those two days.

Internationally, at this time, countries across the world are pushing forward to vaccinate their populations. Recently, AstraZeneca has announced that they will be conducting separate new trials for the UK, Brazil, and South African variants of the virus. The inoculation program roll-out was stalled in South Africa after officials on the ground found the AstraZeneca vaccine to be somewhat ineffective in preventing transmission of the variant in that country.

The Ministry of Health and Wellness in Belize continues to urge all citizens and visitors to wear a face mask properly in public, and also to maintain consistent physical distancing, avoid social gatherings, and wash and sanitize hands often.

Also, the Ministry has officially begun their online vaccination education campaign. Members of the community are asked to support their efforts by liking and sharing official information from the Ministry of Health and Wellness’s social media pages.