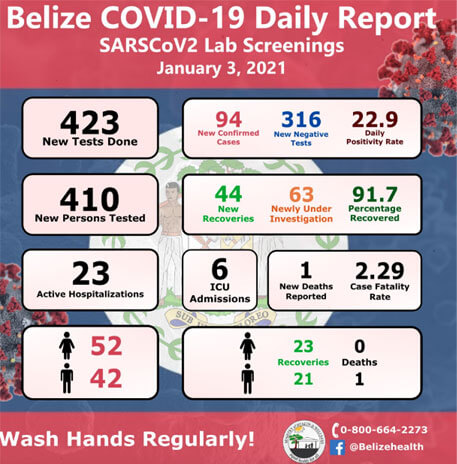 BELIZE CITY, Sun. Jan. 3, 2021– Going into the New Year, cases of COVID-19 continue to trend downward in Belize. Since our last update published on December 28, 14 new deaths have been recorded across the country.

As of January 3, a total of 657 cases remain active, and about 10,901 cases have been confirmed. About 9994 recoveries have been recorded to date, which means that 91.7 % of all cases within the country have recovered. With the recent deaths recorded, our death toll now stands at 250 — a fatality rate of 2.29%.

Data released for January 1 and 2 indicated that a total of 31 new cases were found after 215 tests were conducted. On that day, about 155 new recoveries were recorded. At that time, 25 persons were being treated in designated wards in hospitals across the country, with 7 persons needing intensive care. One new death was also recorded on that day —again, a male person from the Cayo district.

On the last day of 2020, December 31, 6 new deaths were recorded — three men and three women. Two deaths were recorded in the Belize District and Toledo respectively. One death was recorded in Stann Creek and another in Cayo. On that day, 52 new cases were identified from a batch of 404 samples processed. 106 new recoveries were recorded and 23 persons were actively hospitalized at that time, 6 of whom were in need of intensive care.

On December 30, data released from the Ministry of Health and Wellness reported a total of 57 new cases. A batch of 367 tests were processed on that day. One male person from Toledo passed away as a result of COVID-19 complication on that day and about 96 recoveries were recorded.  Of the 22 active hospitalizations that were recorded at that time, six persons were admitted to an intensive care unit.

Five new COVID-19-related deaths — of 3 men and 2 women— were recorded on December 29. A total of 77 new confirmed cases were found from a batch of 459 tests processed. About 164 recoveries were recorded, and 25 persons were hospitalized at that time.

It was also announced that another COVID-19 vaccine was authorized for use in Britain late last year. The University of Oxford partnered with AstraZeneca to develop this coronavirus vaccine. This vaccine is reported to have an efficacy rate of about 90%. As of Sunday, this vaccine has been authorized for use in India as well. The company is expected to produce up to two billion doses this year.