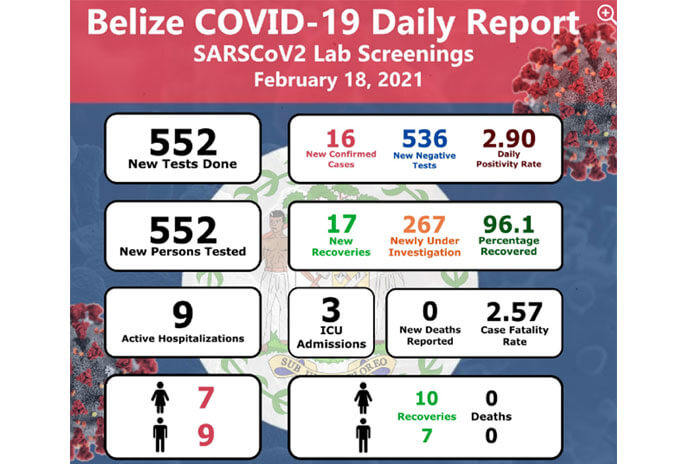 BELIZE CITY, Thurs. Feb. 18, 2021– The Ministry of Health and Wellness (MOHW) is concerned that the population may begin to let their guard down, given the lower COVID-19 numbers recorded over the recent month. Over the past two weeks, the MOHW has noticed that more movement has been taking place within the population, on the heels of the modification of the curfew hours and the lifting of some of the previous movement restrictions. The Ministry is urging the public to continue to practice all the protocols in place to prevent another outbreak and lockdown of the country.

In an interview with News5 this week, the acting Director of Health Services, Dr. Melissa Diaz-Musa, shared that the increased movement of members of the community will inevitably cause a spike in new cases if it is not controlled. These concerns remain at the back of the minds of officials at the Ministry, in addition to fears of the possible entry into the country of three new coronavirus variants that have been detected across the world.

Readers would recall that we reported that samples from Belize were sent to Baylor College in Texas and the Caribbean Public Health Agency (CARPHA) so that genotype testing could be done to determine whether these new variants could be found among the local population. Recent reports are that testing has become bogged at the US facility, as that country continues to face daily record-breaking numbers and an overwhelmed system. At CARPHA, genotype testing has also been bunged. According to the Director of Health Services, the agency found some problems in their lab after detecting one of the new variants in Trinidad and Tobago. Belize is unable to carry out this type of testing, so we are forced to wait for the results from these two agencies or seek other options.

Reports are that our government has reached out to the CDC in Mexico and Guatemala to find out whether they would be able to conduct genotype testing on samples from Belize.

At this time, Belize and the COVAX facility are finalizing the vaccine procurement agreement. The Ministry of Health and Wellness is awaiting a confirmation letter from the facility which will outline the number of doses that will be allocated and the date of delivery of the vaccines that will be sent to Belize.

To achieve herd immunity, however, the country would have to vaccinate about 70% of the population.

In regards to current COVID-19 statistics, a total of 12,207 cases have been recorded since the start of the pandemic in Belize. Of that number, 11,725 persons have recovered from COVID-19.

The recent reports indicate 1 new COVID-19-related fatality, thus taking the total death toll to 314 persons. Of that number 207 are male and 107 female. Our fatality rate thus stands at 2.57%.

On February 18, a total of 16 new cases were found from a batch of 552 tests done. Also, a total of 17 recoveries were recorded on that day. No new death was recorded.

One new fatality was recorded on February 17, 2021: a male person from the Corozal District. A total of 8 new cases were found from a batch of 322 tests processed on that day, and the MOHW infographic recorded 26 recoveries.

On the previous day, February 16, 13 new cases were found within a batch of 421 tests. Fortunately, no additional death was recorded on that day, and 14 new recoveries were recorded.

At least six new COVID-19 variants have been identified across the world at this time. Of concern to health officials are the three variants of the virus that have been spreading more rapidly than the original virus. These are the UK variant (B.1.1.7), the South Africa variant (B.1.351), and the Brazil variant (P.1).

These variants are said to spread more easily and quickly than the other variants, and this may lead to more cases, hospitalizations, and potentially, deaths. Data so far suggests that antibodies generated from the vaccines recognize the variants, and are thus effective at preventing their transmission, but investigations are still being done at this time.

The UK variant has now been identified in at least 60 countries across the world.

The recommendation at this time is increased compliance with public health mitigation strategies. This means continued use of face masks, physical distancing, proper hand hygiene and, if necessary, isolation and quarantine. The rollout of a vaccination campaign is the primary mitigation strategy being recommended at this time.

BELIZE CITY, Thurs. Nov. 25, 2021 -- In the wee hours of this morning, police responded to reports that an aircraft was seen flying...
Read more
Headline