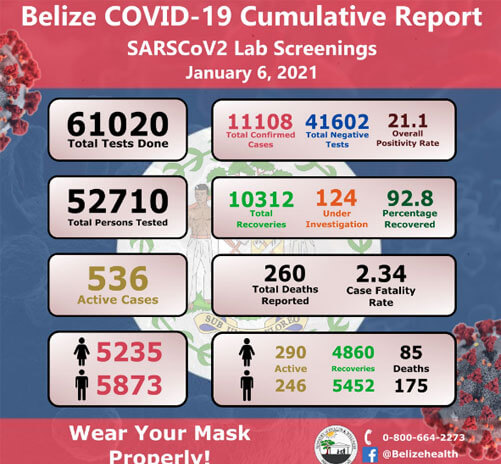 BELIZE CITY, Wed. Jan. 6, 2021– According to the Acting Director of Health Services, Dr. Melissa Diaz-Musa, recent data reported by the Ministry of Health and Wellness (MOHW) is showing a fluctuation of COVID-19 numbers. She outlined that the MOHW remains cautiously optimistic, since no extreme increase has been seen since the Christmas weekend. She says that socialization and festivities over the holidays may not have amped the spread of the virus as significantly as the health officials had feared.

To date a total of 11,108 persons have been infected with the coronavirus in Belize, with the majority of these persons —10,312 – having already recovered. Recent data shows a total of 536 active cases, and since our last update, 11 new fatalities were recorded. The total number of deaths now stands at 260 fatalities since the start of the pandemic in Belize.

Recent data released on January 6, 2021, confirms the discovery of 100 new cases. These were found among a batch of 470 test samples that were processed. About 82 recoveries were recorded on that day, and unfortunately, two additional deaths were added to the national death toll on that date. Both of the persons who died were females — one from the Toledo District, the other from Cayo. A total of 16 hospitalizations were recorded on January 6th as well. Of those 16 persons, two were admitted to an intensive care unit on that day.

According to the numbers released on January 6, 32 new cases were identified in the Belize District, with 30 of those cases being found in Belize City. Also, 26 cases were found in Cayo at that time.

On the previous day, January 5, it had been reported that a total of 81 new cases were identified from a batch of 233 tests conducted. That day, 135 recoveries were also recorded, along with 22 active hospitalizations. Three persons were reportedly admitted to an intensive care unit. Two additional deaths were recorded on that day — both from Toledo, one male and the other a female.

On January 4, a total of 7 deaths were recorded, two males and five females. The fatalities occurred across the country, with two persons from Cayo, Orange Walk and Corozal respectively, as well as one individual from Stann Creek, passing away. On that day, a total of 37 new cases were found from a batch of 282 tests processed.

Of the 23 persons who were hospitalized on that day, five persons were admitted to an intensive care unit on that day. Also, 101 additional recoveries were recorded on the same day.

The Ministry of Health and Wellness continues to urge Belizeans to do their part to reduce the spread of the coronavirus within the country. Members of the public are asked to follow all public health advice and fully adhere to the Isolation and Quarantine Guidelines if they test positive for COVID-19.