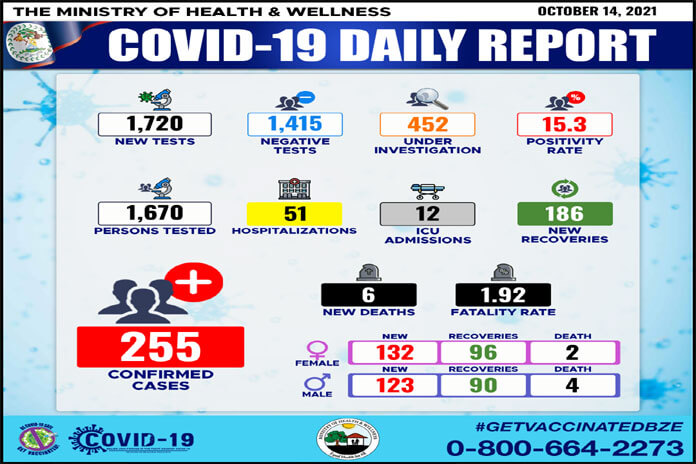 BELIZE CITY, Thurs. Oct. 14, 2021– The COVID-19 Delta variant continues to spread across communities in the country. The vaccination rollout by the Government of Belize presses on as Belize draws close to the milestone achievement of having administered at least a first dose of the vaccine to 60% of the country’s population, according to Prime Minister Hon. John Briceño.

The government is continuing its call to all citizens to go get vaccinated.

As a part of its efforts to curb the spread of the virus in Belize, the Ministry of Health and Wellness has opted to increase the number of testing sites across the country for the general public. Two sites were established last week in Belize City and Belmopan. According to Prime Minister Briceño, the government is decentralizing testing to make it as available as possible to the general public.

He said that the goal is to have the positivity rate go below 10% by the end of October, so that the country can begin to see some relaxation of the stringent protocols currently in place.

The most recent statistics released by the Ministry of Health and Wellness indicate that a total of 27,036 children and teenagers between the ages of 12 and 17 have received at least the first dose of the Pfizer vaccine. A large number have already reached out to get their second jab as well.

According to the data released, 202,517 persons have been vaccinated in the country so far, with 44,945 of those persons having received their first dose of the vaccine, while the remaining 157,572 have received both shots where necessary.

Currently four vaccines are being administered in Belize. These are the AstraZeneca, Sinopharm, Pfizer, and Johnson and Johnson vaccines.

As of today, October 14, a total of 2,772 actives cases are currently within the country. Since the start of the pandemic, we have had 23,762 confirmed cases of the COVID-19 virus, with 20,502 recoveries persons so far recovering. The current fatality rate of the virus in Belize is 1.92%. So far, 457 persons have died as a result of COVID-19.

A total of 255 new cases were confirmed today from a batch of 1,720 tests processed. 51 persons were hospitalized, with 12 of those persons being in need of intensive care. A total of 186 persons have recovered. Also today, 6 new fatalities were recorded.  Two women and four men, five of those persons were unvaccinated. Four of the deaths were from the Belize District, and one from Orange Walk and Stann Creek respectively.

On Wednesday, October 13, the country recorded 239 cases from the 1,638 tests that were processed. A total of 55 hospitalizations were recorded, with 17 of the hospitalized persons needing intensive care. A total of 236 recoveries were logged on that day. Two persons died as a result of COVID-19. According to the data, both were unvaccinated women — one from the Belize District, the other from Cayo.

On October 12, a total of 321 confirmed cases were found across the country from the 2,024 tests that were processed. Of the 55 persons admitted to the hospital on that day, a total of 18 were placed in an ICU. A total of 272 recoveries were marked, and 7 deaths recorded.

During the weekend — from Saturday, October 9, to Monday, October 11– a total of 3,405 tests were processed across the country, and 491 new cases were confirmed. There were 16 patients in critical condition in ICUs across the country and 47 hospitalized at the time. Over those three days, 11 deaths were recorded — 5 women and 6 men. Two of those persons were from the Belize District, 6 from Cayo, 1 from Orange Walk, 1 from Stann Creek, and 1 from Toledo. Two of those persons were fully vaccinated, and the other nine were unvaccinated.

And on Friday, October 8, a total of 269 cases were confirmed from the batch of 1,797 tests that were processed. 54 persons were hospitalized, with 17 of those persons in critical condition and in an ICU. There were 159 additional recoveries and a total of four new deaths were recorded.

Two of those persons who died were men and two were women — 2 from Orange Walk and 2 from the Belize District. Three of the persons were unvaccinated and 1 fully vaccinated.