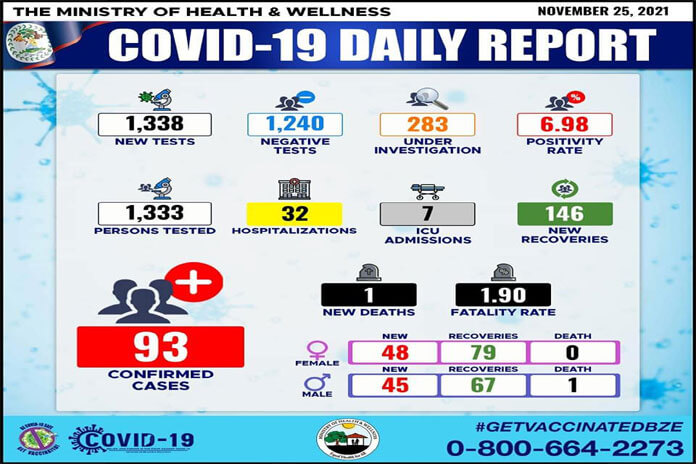 BELIZE CITY, Thurs. Nov. 25, 2021 — This week, adjusted curfew hours came into effect. As reported, the curfew period on Friday and Saturday nights now starts at 11:00 p.m. and ends at 4:00 a.m., while the nightly curfew period from Sundays to Thursdays now starts at 10:00 p.m. and ends at 4:00 a.m. The Ministry of Health and Wellness (MOHW) reportedly put into effect this reduction in the nightly curfew in preparation for the start of the tourism peak season in the country. However, a triple-digit number of active cases is still being reported daily, with a number of persons still hospitalized due to Covid-19.

As of Wednesday, November 24, the Ministry of Health and Wellness reported that 208,876 persons had been vaccinated across the country. Of that number, 15,688 persons had received a single dose, while 193,188 have received two doses. This brings the total percentage of the population that is vaccinated to 47.7%, as opposed to the 70% threshold required for herd immunity in the country. The Health Ministry continues to vaccinate Belizean youths ages 12-17, with 28,932 of the young ones in that age group being vaccinated as of Thursday; however the GOB has yet to roll out their campaign for vaccinating children ages 5-11.

A total of 1162 active cases of the virus were detected countrywide as of Thursday, while approximately 28,292 persons have been deemed recovered since the start of the pandemic. As of Thursday, 32 remain hospitalized, with 7 needing intensive care. A total of 570 deaths have been recorded since the start of the pandemic, resulting in a current fatality rate of 1.90% with 1 fatalities being recorded over the today.

Today also saw a total of 1,333 tests being processed, with 93 new cases being detected. Also, 146 persons were declared to be cleared of the virus.

On Wednesday, November 24, a total of 111 new cases were identified from the 1,627 tests processed by the MOHW, and a total of 163 recoveries were logged. On that day, it was reported that three persons had lost their lives to COVID-19 — 2 females, and 1 male. Two of those fatalities were from the Stann Creek District, while one was recorded in Toledo. Two of these persons were unvaccinated, while the other was fully vaccinated. The day’s positivity rate was documented at 9.09%.

On November 23, a total of 1,803 new tests were processed and 179 new cases were identified. On that day, two deaths were also recorded — 1 male and 1 female. One of the persons who died was from San Pedro, while the other was reportedly from Stann Creek, and both persons were reportedly unvaccinated. A total of 210 recoveries were recorded on that day.

In the weekend report for the period of November 19-22 released on Monday, the Ministry recorded 3,364 tests and 181 new cases over that period. A total of 495 persons were classified as recovered and six new deaths were logged – 2 females and 4 males. One of the persons who died was reportedly from Corozal, one was from Orange Walk, one from the Belize District, one from Cayo and two from Toledo. Of the six persons, two had been fully vaccinated while one received a single dose and the remaining three were unvaccinated.