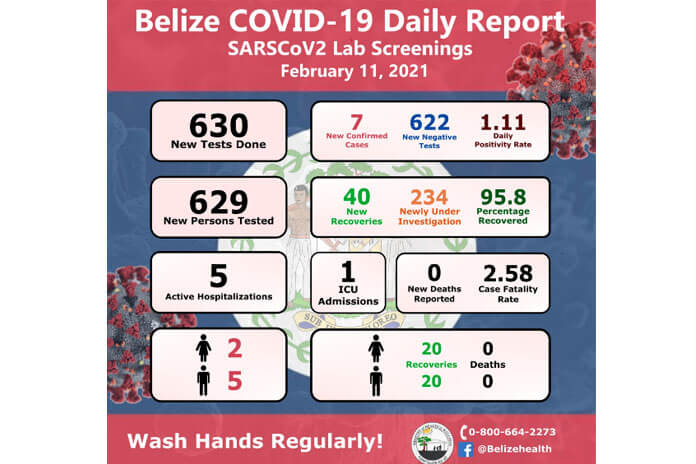 BELIZE CITY, Thurs. Feb. 11, 2021– As of Thursday, February 11, 2021 about 106,991,090 confirmed cases of the novel coronavirus have been recorded over the world. Of that number, about 3% or 2,347,015 persons have succumbed to the illness. Countries across the world are on a fast-track to vaccinating their most vulnerable populations, and with the help of the COVAX facility and other partners, the inoculation campaign should commence in Belize before the end of April 2021.

Recent data released from the Ministry of Health and Wellness continues to show a steady decline in COVID-19 cases across the country of Belize. To date, a total of 12,114 confirmed cases have been identified across the country, and 11,607 of those infected persons have officially recovered. Since our last update, 6 additional fatalities were recorded. The six additional deaths occurred on Tuesday and Wednesday of this week and have taken our total mortality count to 313 persons, which constitutes a fatality rate of 2.58%.

On February 11, 7 new cases were identified across the country from a total of 630 tests conducted. Forty persons were marked as recovered, and fortunately, no new death was announced. On that day, 5 hospitalizations of persons infected with COVID-19 were recorded, with one of those persons needing intensive care.

Unfortunately, three deaths — two women and one man — were also recorded on February 9. Two of the persons who passed away were from the Belize District and the other from Stann Creek. A total of 266 tests were conducted on that day and 9 new cases were found. Also, twenty-three new recoveries were recorded.

Internationally, the World Health Organization has warned that the UK COVID-19 variant could have an impact on the epidemic curve in Europe. Recently, Dr. Anthony Fauci, the top US infectious diseases expert, has shared that the United States may be able to inoculate a majority of its population by the end of summer.

Also, recent data released by the Center for Disease Control confirmed that double-masking can significantly improve protection against the COVID-19 virus.

In Belize, the Ministry of Health and Wellness has begun to roll out its vaccination education campaign with video advertisements on local television stations. Citizens and visitors are asked to continue to adhere to all the COVID-19 regulations put in place by the Government of Belize. The Ministry of Health and Wellness continues to encourage everyone to wear a face mask properly in public, maintain consistent physical distancing, avoid social gatherings, and wash and sanitize hands often.