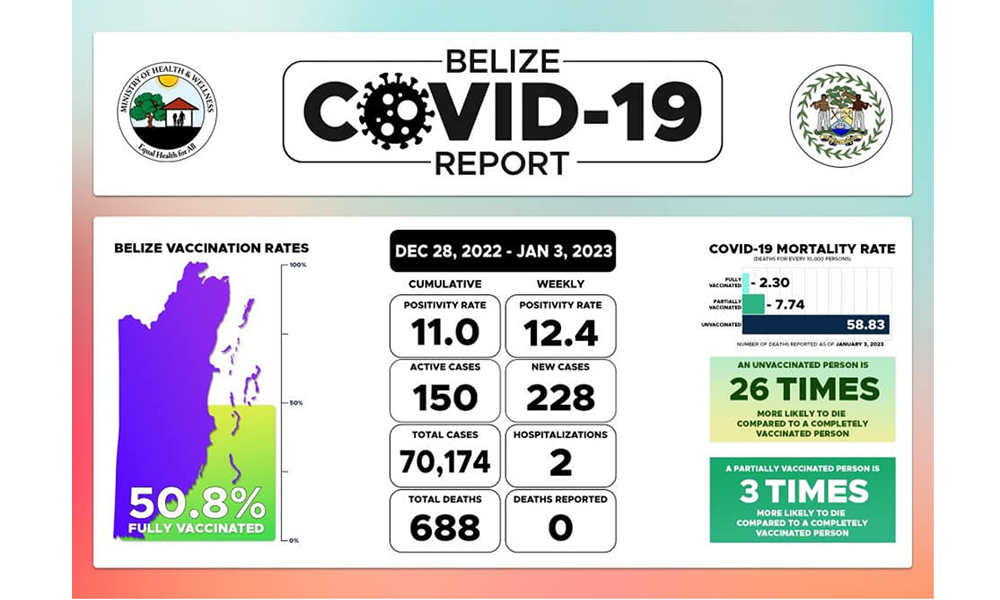 In the middle of December, it was reported by the Ministry of Health and Wellness (MOHW) that the country may be experiencing another wave of covid-19 following months of low viral activity and zero hospitalizations. During the weekend of December 9th – 12th weekly detected cases had spiked to 259 taking the positivity rate for that week from 2% to 9.9%. Following the Christmas and New Year festivities contractions were plentiful as another substantial increase in cases were documented this week.

On Tuesday, the MOHW’s report showed that there were 228 cases detected between December 28th and January 3rd. This took the country’s cumulative positivity rate up to 11% and the weekly positivity rate to an alarming 12.4%. Thankfully, there have been no reported covid-related deaths, however there are now two hospitalizations that have been linked to the virus over the weekend. Director of Public Health and Wellness, Dr. Melissa Diaz had previously shared that the Belize district was one of the main zones of concerns due to clusters being detected in Belize City and at the Kolbe Foundation in Hattieville.

The new report reaffirms that Belize is currently the highest affected area as 82 new weekly cases were reported – 50 of which were in Belize City and 14 were in Ladyville. The Second highest toll of active cases comes from Cayo with a total of 62 new cases followed by Toledo with 35 new cases. Stann Creek and Orange Walk have reported a lower number of active cases at 29 and 12 detections respectively. Meanwhile, Corozal and San Pedro are the only two areas who have documented active cases in the single digits at 3 and 5 respectively.

Presently there are a total of 150 active cases across the country bringing our cumulative contractions to 70,174 cases and our cumulative deaths to 688. There has still been no confirmation by the MOHW that the Omicron subvariants BQ.1 and BN.1. are in the country, however Geno-sequencing has been scheduled to recommence this month.