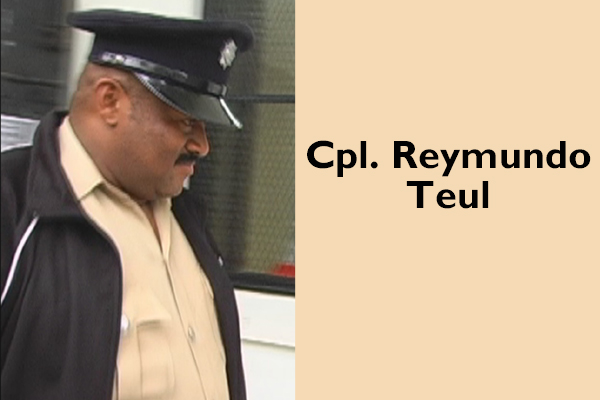 Today, two of the three police officers accused of “shaking down” Thyrell Hyde back in September were finally brought to court and criminally charged with theft and harm. Those officers are Reymundo Requeña, 42, a police corporal of Benque Viejo, and Edgar Teul, 30, a police constable of Maya Mopan, Belmopan.

According to police, Thyrell Hyde reported that on September 8, 2013, while socializing with some friends at Dolphin Park, he was approached by some officers who exploited their authority to steal money from the youth.

And how brazen were these officers? They searched Hyde, took the money he had on him, and when they found his Atlantic Bank ATM card, they took him to the bank’s Freetown Road location and allegedly stole money from his account, as he stood and watched.

The two officers were taken to court this afternoon in a vehicle with a private license plate, and they appeared nonchalant during their arraignment before Magistrate Clive Lino. Cpl. Requeña was charged with harm upon Hyde and for stealing $70 from him, as well.

PC Teul was charged with theft, along with Cpl. Requeña, for stealing $260 from Hyde.

No objections were made against bail being offered to the officers – no objection on the basis of the prevalence of the crime, or the strong evidence against them (the surveillance video tape), nothing.

Since no objections against bail were made, the men were offered and met bail of $4,000 and one surety of the same amount. The conditions of their bail are that they surrender their travel documents and they cannot leave the country without first consulting with the court.

After the men signed their bail forms, which were taken to them inside the holding area, Cpl. Requeña, who was dressed in civilian clothing at the arraignment, changed into his police uniform, in what seemed to be an attempt at trying to avoid the cameras of the media.

PC Teul used the cover of other men who had been charged and were being escorted into the police van and sneaked out along with them – running, yes running, away from our cameras.

The third person accused of the crime has not as yet been arraigned.

The men are scheduled to appear back in court on February 11, 2014.