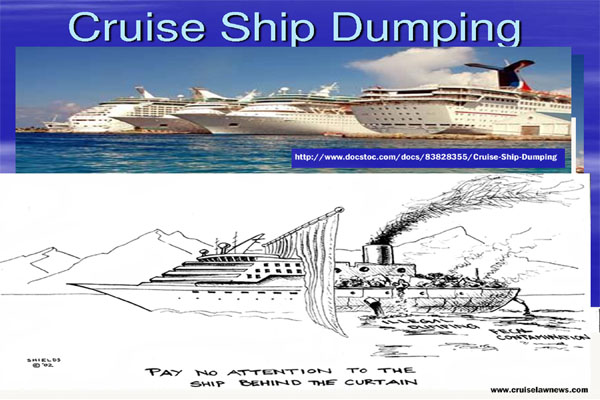 Wonder where cruise ships waste go? Did you know these could be dumped just a few miles from our shore? What are our fish eating and drinking?

Jackie Savitz, Director of the Pollution Program for Oceana in the US, issued a statement in May 2003, decrying what had been reported as sewage dumping by a Norwegian vessel in US waters.

According to Savitz, the first cruise ship into Seattle’s port had already fouled Puget Sound and Washington’s coastal waters with more than 16,000 gallons of raw sewage.

“This is actually not an isolated spill, as the industry portrays it. There is no law to prevent ships from dumping raw sewage once they are three miles from shore, as the Norwegian cruise ship claims it was. Only voluntary agreements exist, and no one has the responsibility or the authority to make cruise lines follow these agreements,” Savitz added.

The Oceana director noted that, “The International Council of Cruise Lines (ICCL), a trade group of which Norwegian is a member, has an environmental policy that supposedly requires all members to hold their treated sewage until they get out four miles from the shore and to hold raw sewage until the ship is twelve miles from shore.”

A major cruise line confirmed this in published information which said that treated sewage may be discarded at greater than 6 knots beyond 4 miles from shore.

Oceana has advocated in Belize against bottom trawling, illegal fishing and offshore drilling. So far, they have been silent on the issue of cruise port expansion in Belize with the proposed introduction of a port by Norwegian – a current debate that has engaged tourism stakeholders and environmentalists.

At a press conference hosted by Alex Munoz, Vice President for Oceana in South America, who now has responsibility for the Belize office, Amandala asked the Oceana rep whether this is an issue that Oceana intends to address, as it expands its work here in Belize.

Munoz said that, “Oceana is aware of the plans for increasing the cruise ship activity here and we are concerned about the impacts of cruise ship lines, [some] having no treatment for the sewage especially, and also the damage that can be caused by the anchors. So we will look into this issue very carefully and once we have a new leader here, we’ll decide whether we will be more involved.”

According to the Oceana VP, they have been engaged in “strong fights” against cruise ship lines, such as Royal Caribbean, over the dumping of sewage in the waters.