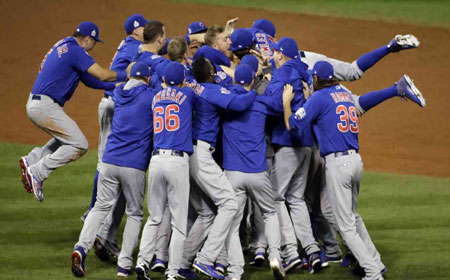 BELIZE CITY, Thurs. Nov. 3, 2016–There are quite a few Dodgers fans in Belize, and also Giants fans and Yankee fans, and others; but, ever since television arrived in Belize in the early 1980’s with WGN Channel 9 the main station, featuring broadcaster Harry Caray’s Chicago Cubs, large numbers of Belizean baseball fans have been hooked on the ritual cycle of hope and disappointment dished out religiously, year after heartbreaking year, by the never quite good enough, Cubbies. Belizean fans, by and large, were of Harry Caray’s mold, “die hard,” always believing that one day, one fine day, Cubs would be World Champions.

Well, that day is here; last night, actually, as the Chicago Cubs finally ended the 108-year drought since the 1908 Cubs won the World Series. They beat the Cleveland Indians, 8-7, in game 7, after being down 3 games to 1 in the best-of-7 series. And we just had to share the adjacent article with the many jubilant Cubs fans among our readership.