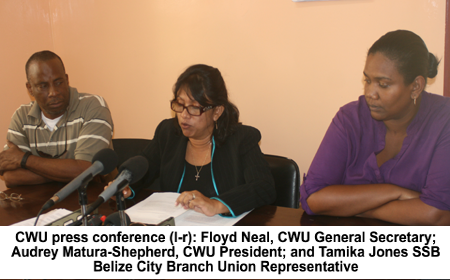 BELIZE CITY, Thurs. Jan. 29, 2015–For the first time in the Social Security Board’s (SSB) 33 years of existence, a number of its three hundred employees did not receive their end-of-month salary on the 26th of the month and instead, are scheduled to receive their payments by today, Thursday, which, by the standards of the institution, is technically four days late.

The situation is the result of uncertainty caused by miscommunication between the management of SSB and the Christian Workers Union (CWU), which acts on behalf of the SSB employees who are registered with the union.

Sometime last month, the management of SSB proposed to roll out a “transitional increment” to reward employees according to their level of work performance as a means of replacing the bonus that each employee normally gets in March after they have been assessed by SSB’s Key Performance Indicators (KPI) system.

However, the president of the CWU, attorney Audrey Matura-Shepherd, has contended that the union and its members were not fully consulted about the proposal, and that SSB made a “unilateral decision” when they went ahead and processed the payment for the increment for some of the employees, who were paid a portion of that increment on Monday of this week.

When the union found out, its head office got involved and wrote to the management of SSB, since both parties are currently in the process of negotiating a Collective Bargaining Agreement (CBA) and although two in-house union members reportedly agreed to accept the increment on behalf of the other unionists, Matura-Shepherd maintained that those two had no right to do so because they do not represent all the union members.

The union now blames the SSB management for “acting unilaterally without consultation”, which, according to its president, is a direct contravention of the CBA, and as a result, she clarified the CWU’s position on the matter at a press briefing on Tuesday of this week.

She said, “This was clear that it has never been the position of the employees of SSB, nor CWU – who represents their wishes – that there shouldn’t be an increment system. On the contrary, the employees of SSB have been pushing for the increment system to be ready and rolled out, of course, after proper consultation. It is no fault of SSB employees, especially those below the managerial level, that such system has not been rolled out as yet, and that prematurely and unilaterally, SSB management seems to be making decisions contrary to our CBA.”

“How are the staff members now being affected? Unfortunately, because the management went ahead and prematurely paid out this transitional increment, and they now realize that they have erred, instead of making the salaries of everyone just go through and the following pay period deduct it, what they did, there were some salaries that had already been posted—those through First Caribbean Bank that they could not withdraw—so they told those employees that next pay period they will withdraw it. But then they went ahead and those who had not been fully posted, they withdrew and withheld their salaries for $62 or $98. They withheld people’s salaries and said to them, ‘well, we have to hold it back because of your union’, so as to deflect from their wrongdoing. They are saying basically to their employees that ‘you are not getting paid because of the union and that is rather very, very, very unfair, unjust and disingenuous”, she went on to say.

From what we have gathered, the union’s position is that its members would take the increment, but they also reserved the right to collect their KPI bonuses in March; however, the agreement was that one was to replace the other, and therefore, the management of SSB decided to reverse the payment on the increment since the sentiment was that while some of the employees were willing to accept the increment, many of them were insisting that they be paid their bonuses, and we understand that as a result of that polarity, all the employees’ paychecks weren’t ready on Monday.

According to Matura-Shepherd, last Friday, January 23, one of their union representatives at SSB informed them that their manager told them that the institution went ahead with the implementation of the increment because management had basically gotten the “okay” from two of those union reps, but she maintained that both SSB and the union reps are aware that any decision that the employees who belong to the union make, should be put in written form.

SSB management had also written to its employees to notify them that the salaries would be late in order to address the matter, and noted that it was due to the union’s “indecisiveness” that the situation arose; however, Matura-Shepherd has pointed fingers back at the management, and alleged that the union sought clarification, but was ignored by SSB management, who then made a “unilateral decision” without proper consultation with the CWU.

Today, Amandala spoke to SSB chairman, Doug Singh, who has since refuted Matura’s allegations, as well as accusations that employees who are a part of the union are treated differently from those who are non-union employees, explaining that the difference in treatment was only because there was division among the employees who want the increment to roll out immediately, and those who do not want it.

We were told that the remaining workers who have not yet been paid would have been paid by today, depending on the processing time of the different banks of the employees.

Singh informed us that since the issue between the SSB Board and the CWU has become controversial, the SBB Board has decided to cancel the rollout of the increment system, which means that the employees will be entitled to their KPI bonuses in March.