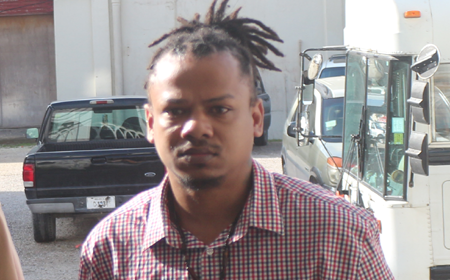 BELIZE CITY, Tues. Feb. 2, 2016–Supreme Court Justice Adolph Lucas this morning ruled to acquit accused murderer Daniel Anderson, 31, of the June 2010 murder of Joyce Mitchell, 19, who was shot in the head as she sat on her sister’s car in front of their home on Sibun Street.

The trial was without a jury.

In acquitting Anderson, Justice Lucas said that the prosecution had failed to prove the case against him.

“The Crown did not discharge the burden (of identification) to the requisite standard. I have no other recourse but to find the accused not guilty of murder,” Justice Lucas said at the conclusion of his judgment.

Justice Lucas ordered Anderson to stand up. “I find you not guilty of murder. Go and try to sin no more,” he said.

Anderson was on remand since June 23, 2010, when he was arrested for Mitchell’s murder.

On the evening of June 17, 2010, Joyce Mitchell was sitting on her sister’s car in front of their Sibun Street home, when a young man who was standing near Vernon Street Bridge shouted out, “Gunman, gunman.”

Seconds later the man, whose face was covered, released a barrage of shots from a .9mm handgun. One of his bullets caught Mitchell in the right side of her temple and exited through the left side, causing her to fall in the nearby drain.

Mitchell was rushed to the Karl Heusner Memorial Hospital, but died shortly after while undergoing treatment.

On Wednesday, January 20, Daniel Anderson’s murder trial began before Justice Lucas, who heard the case without a jury.

In order to secure a conviction, Lovell relied on two key witnesses, Julie Mitchell, a sister of Joyce Mitchell who had identified the gunman as Anderson in a police line-up, and Mitchell’s mother, Jennifer Staine.

Julie Mitchell is out of the country and therefore was unable to testify at the trial. Lovell, however, managed to get a statement that Mitchell had given to the police admitted into the evidence against Anderson.

Staine, the victim’s mother, who had also purportedly identified the shooter as Anderson in a police line-up, recanted her statement in her testimony in court.

The prosecution’s case, therefore, appeared to suffer from a major deficiency, that of a proper identification of the person who fired the fatal shots, killing Joyce Mitchell.

In his summary of the evidence during his judgment, Justice Lucas said that because Anderson was unable to confront his accuser, Julie Mitchell, he was deprived of his constitutional right.

Furthermore, Justice Lucas declared that there were discrepancies in the statement that Mitchell gave to the police. Her statement, the judge said, fell short of two important facts — there was no mention of the duration of time that the witness saw the accused, and neither did the statement explain the distance from which the witness had seen the accused.

Anderson’s attorney, Simeon Sampson, SC, allowed his client to give an alibi statement from the witness stand, in which he told the court that he was not in Belize City at the time that Mitchell was shot and killed.

Anderson told the court that he was in Belmopan at his baby mother’s house. To corroborate his alibi, the mother of Anderson’s child, Jennine Jones, and a friend of hers testified that Anderson was indeed in Belmopan at the time of the shooting.

Justice Lucas, however, said that he did not accept either Anderson’s alibi or the testimony of his two corroborating witnesses.

As Anderson is freed from the murder indictment, the question remains: who was it that shot and killed Joyce Mitchell?