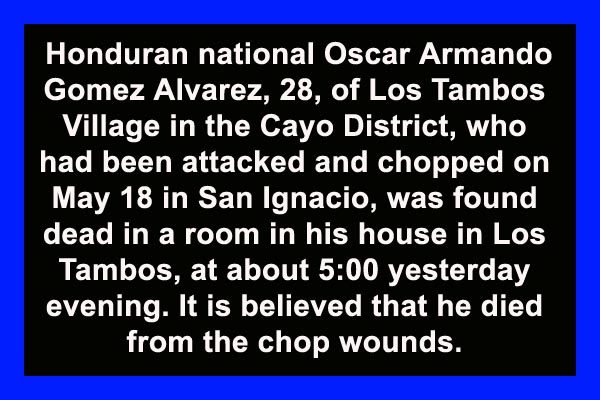 Honduran national Oscar Armando Gomez Alvarez, 28, of Los Tambos Village in the Cayo District, who had been attacked and chopped on May 18 in San Ignacio, was found dead in a room in his house in Los Tambos, at about 5:00 yesterday evening. It is believed that he died from the chop wounds.

Police said that on Sunday, May 18, Alvarez was attacked by an unknown man in San Ignacio who chopped him four times in the left shoulder area, and twice on the left side of the face, those two being large cut wounds.

Alvarez was taken to the Western Regional Hospital in Belmopan that Sunday, where he was treated and later released. After he was released, Alvarez moved out of San Ignacio and went to live in Los Tambos.

The woman in one of whose houses he was living, on a farm on the outskirts of the village, reported that Alvarez only came in at night to sleep, and during the day, he went out. She told police that yesterday morning at about 9:30, he came to her house, which is about 50 yards away from his house, drank a cup of coffee and left.

At about 4:30 yesterday evening, her son went to Alvarez’s house to look for him, and upon entering the room, he saw him motionless on the floor. The son immediately went to his mother and told her, and she called police.

Police said that at about 5:00 yesterday evening, they went to the area and found Alvarez dead in the house. He was seen with several chop wounds. The body was taken to the morgue at the San Ignacio Community Hospital, where it awaits a post-mortem to certify the cause of death

Police say they do not know who chopped Alvarez, or why.