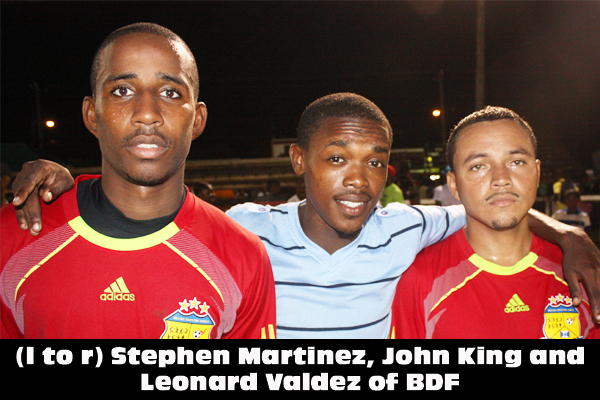 “From a King to a Jack,” and just like that, Week 1 results find defending champion Police United FC at the bottom of the standings, as they were shocked, 3-1, by the Belize Defence Force FC on Saturday night in the new season opener at the Isidoro Beaton Stadium in Belmopan. The other two games on Sunday afternoon were both drawn, so that leaves Police as the only team without a point, aside from Verdes FC, who were idle in Week 1.

In the opener on Saturday night, BDF sported a 2-nil first half lead with goals from John King (14’) and Stephen Martinez (44’), while Police lost striker Evan Mariano to a red card and had to play the whole of second half a man down. Clifton West brought Police within striking distance with his diving header at the 83rd minute, but Leonard Valdez closed the curtain for BDF in injury time (90+’) to make it, 3-1, BDF over Police, in game 1 of the new season. After the game coach Gregory “Paisa” Cantun said he was satisfied that their hard work has paid off, and physiotherapist Ben Abba noted that they have not lost in 10 pre-season outings. For his part, new Police coach Hilberto Muschamp says he likes what he is seeing so far with his team, with whom he has only worked the past two weeks. “We held them, and even pressed them with only ten men for most of the game. It’s a long season, and we’re not worried,” he said.

Game 1 on Sunday afternoon was at the Norman Broaster Stadium in San Ignacio, where visiting Paradise/Freedom Fighters FC held home standing San Ignacio United to a 2-2 draw. The visitors jumped to a 2-nil lead, with both goals coming from Franz Vernon (4’ & 55’), but the San Ignacio squad came back strong with goals from Larry Simon (66’) and Roy Cano (89’) to secure the 2-2 draw.

The other Sunday afternoon encounter was at the MCC Grounds in Belize City where last year’s sub-champs FC Belize earned their first point along with visiting Belmopan Bandits FC, as they ended in a 0-0 stalemate. FC Belize’s “Best Goalkeeper” in the last tournament, Glenford Chimilio, silenced any doubters about that choice by stopping Deon McCaulay’s attempt (and again on a re-take) from the penalty spot early in second half. Fans will be watching keenly to see if Deon can regain the form and confidence he displayed last season before his injury in the semifinals against FC Belize, also at the MCC. Apparently, he has not been the same since.

Verdes FC is waiting in the wings, and see their first action this coming weekend. In their pre-season match against BDF, which BDF won 2-1 at the Marshalleck Stadium a couple weeks ago, veteran star midfielder Norman Tilliman Nunez looked on from the sidelines. Likewise, he had turned down an advertised opportunity to play a training match with FC Belize against the National Team in preparation for the CONCACAF Gold Cup. It seems that football fans will have to seek out their best chances to see the legend in action again before he decides to hang up his boots. One opportunity may come this weekend when Verdes, who also now feature the outstanding Jimenez brothers, Orlando “Leechi” and Ricardo “Cheety,” is scheduled to debut against league leading BDF at the Carl Ramos Stadium in Dangriga. Both the stadium and the situation may be incentive enough for Tilliman to decide to make an appearance.