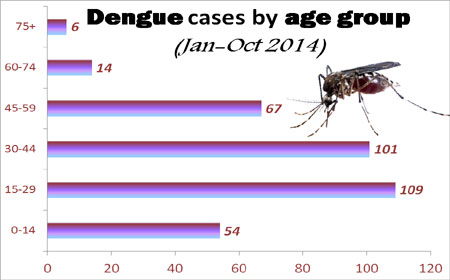 BELIZE CITY–Latest data received today from the Belize Ministry of Health indicate that up to October 2014, roughly 350 cases of dengue have been diagnosed in the Belize District, with 82% of those cases being concentrated in Belize City.

A further analysis of the Belize District cases reveals that 65% of those cases were diagnosed in persons living on the Southside of Belize City, particularly locations in the Collet, Port Loyola, and Lake Independence electoral divisions.

Today, we got a chance to look at detailed demographic data, which revealed that fifty-four percent (54%) of those cases were females, with the youngest patients being babies less than a year old and the eldest being persons in their 80s.

However, most of the dengue cases have been affecting the productive age population, ages 15 to 44, and this year has seen a spike in hemorrhagic cases—although no deaths have been reported to date.

Dr. Pedro Arriaga, one of the internists at the Karl Heusner Memorial Hospital who attends to dengue patients, confirmed to Amandala that indeed, there is a spike in dengue hemorrhagic fever in Belize City this year compared with prior years.

Arriaga said that those patients manifest bleeding from the lungs, or in the urine or vomit. He told us that there are 30 beds at the medical ward of the Karl Heusner Memorial Hospital, and those are usually occupied by 3 to 4 dengue patients at a time. The spike in cases has been occurring since May 2014 (which is just before the start of the rainy season), Arriaga said.

He explained that dengue is endemic to Belize, and the theory is that if a person had previously been afflicted with one of four serotypes of the virus which causes dengue, another battle with the disease could manifest itself as dengue hemorrhagic fever.

Amandala was able to peruse the dengue classification guidelines published by WHO, and they list warning signs such as abdominal pain and tenderness, persistent vomiting, mucosal bleeding, lethargy, liver enlargement and a decreased blood platelet count.

Dengue without warning signs is the classification ascribed to patients who manifest fever and/or anorexia, rash, and aches and pains. A lab test may indicate that such a person has dengue without the more distressing symptoms.

Severe dengue generally requires emergency treatment. It may cause substantial plasma loss and shock to the patient, as well as severe organ impairment, respiratory distress and extensive bleeding, and such patients would be given a blood transfusion.

According to Dr. Arriaga, there have been some patients who have required blood transfusions this year, but all their cases have been managed successfully, without deaths, he told us. 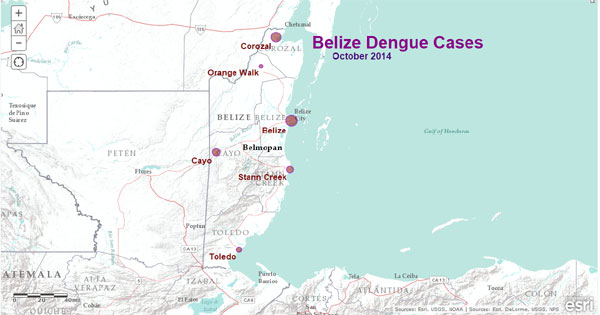