Denver Bevans, 18, remanded for the murder of fireman Jiovanni Lennan 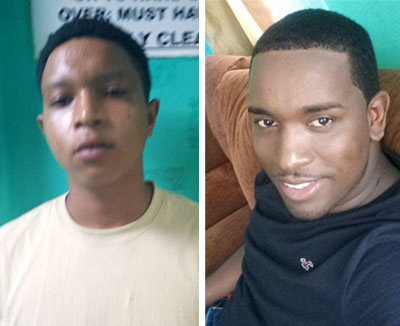 BELIZE CITY, Mon. Nov. 18, 2019– The young man who arrived this morning on the police bus transporting detained persons to court attempted to hide his face from court reporters and television cameras as he was being escorted into Chief Magistrate Sharon Fraser’s #1 court.

When the Chief Magistrate was asking the young man to provide personal details about himself, the accused teenager spoke in a barely audible voice. The young man —Denver Bevans, 18 — was charged by police with the murder of fireman and athlete Jiovanni Lennan, 30.

Bevans told Chief Magistrate Fraser that he was unable to speak louder because the police had beaten him. With a gesture, he indicated that he was suffering pain in his throat.

Bevans told the court he is employed as a fisherman and resides on Cemetery Road. Chief Magistrate Fraser told him that police charged him with murder.

The Chief Magistrate then read the charge to him, which stated in part …”that on November 14, you murdered Giovanni Lennan….”

After reading the charge to him and asking if he understood what was read to him, Chief Magistrate Fraser explained to Bevans that the court would not take a plea from him because the matter would be tried in the Supreme Court after a preliminary inquiry is held, and if it is found that there is sufficient evidence against him for him to be tried in the Supreme Court, that is where he would enter his plea.

In addition to the murder charge, Chief Magistrate Fraser also read a charge of aggravated assault to Bevans, who allegedly assaulted police officer Briceño Chub, “with a dangerous weapon that is a firearm.”

Following the reading of the charges to Bevans, he was remanded to the Belize Central Prison until his next adjournment date on January 7, 2020.

Before Bevans left the courtroom, however, Chief Magistrate Fraser told the court prosecutor that Bevans must be taken to the hospital, before he was taken to the prison.

At today’s police press briefing, Senior Superintendent Hilberto Romero, who heads the National Crimes Investigation Branch, when he was asked details about the incident that led police to charge Bevans for aggravated assault, said, “He pointed his weapon at a police officer who was in the area, that is, after the shooting.”

Lennan was walking into Welch Street from Gibnut Street, heading to his girlfriend’s house after playing a basketball game at the Rogers Stadium, when a man came up behind him and shot him in the head and back.

Lennan died on the scene.

ASP Alejandro Cowo of the Police Department said that a policeman (Constable Chub) who was walking in the area heard the gunshots and saw a man running out of Welch Street with a gun in his hand.

Chu shouted at the man to stop, but the man turned and pointed the gun at the cop, who fired, but missed the culprit, who sprinted away and jumped over the back fence of a yard, which led to Rogers Stadium.

The policeman chased him, and nabbed him.

ASP Cowo said that they are still searching for the firearm, and the motive for the murder is not known yet.

Fire Chief Colin Gillett said that Lennan was one of the National Fire Service’s best firefighters, who had been promoted to leading firefighter. He was confident, always mannerly and soft-spoken, he said, and they are still in shock over his murder. Gillett said that the sudden death has hit them hard.

Ty Bradley, Lennan’s friend and colleague, who is also a firefighter, said that Lennan’s death has been a great blow. He said that Lennan had a calm temperament and was not violent, and he was not known to police. He was an excellent basketball player and could have been considered one of the best in the league.

Lennan will be given an honorary firefighter’s funeral and flags will be flown at half-mast for 30 days at all fire stations, in his honor. He has been a fireman for about 7 years. He was also known as the “Gentle Giant.”

Denver Bevans, on the other hand, is well-known to police. In May, he was charged with conspiracy to commit murder in the shooting death of Lyndon Baldwin, which occurred on Ebony Street in May, but the charge was withdrawn because the prosecution did not have sufficient evidence against him.

In July, Bevans was charged with firearm and ammunition possession offences, and he was fined.