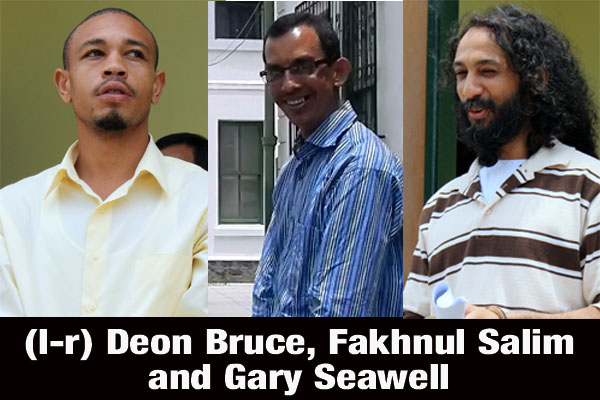 Deon Bruce, Fakhnul Salim and Gary Seawell are not related, but what they do share in common is that they are all facing extradition to the United States on charges ranging from drug trafficking to murder. And today, all three men appeared in court to have their cases heard.

The first to have his case addressed was Bruce, who is wanted for a slew of charges including murder, attempted murder, aggravated battery and possession of a firearm. When Bruce was first brought to court on July 12, he was represented by Bryan Neal, but this morning, Godfrey Smith appeared as his legal representative.

His objection was noted and Bruce’s case was adjourned to November 18, 2013.

Fakhnul Salim was the next accused to have his case heard, and like Bruce, he was represented by Smith and had his case adjourned to October 21, 2013.

Finally, it was Seawell’s turn to have his case heard, for drug trafficking, and he was represented by Arthur Saldivar, who immediately started making submissions to have at least ten of the exhibits presented in the bundle to be deemed inadmissible.

His reason was that the commission of the notary public who had signed the affidavits had expired years before, some as much as six years, before the documents were even introduced.

Iliana Swift, also from the Attorney General’s Office, asked that the case be adjourned in order for herself and Perdomo to prepare arguments, because they were not informed by Saldivar that he would have been making these submissions.

The Chief Magistrate allowed the adjournment and the next date for Seawell’s appearance is scheduled for September 11, 2013.

RUSSIA, Sun. Feb. 10, 2020 (teleSUR)-- The Russian government rejected on Monday the U.S. threats to impose new sanctions against several Russian companies for their cooperation with Venezuela in the oil...
Read more
- Advertisment -