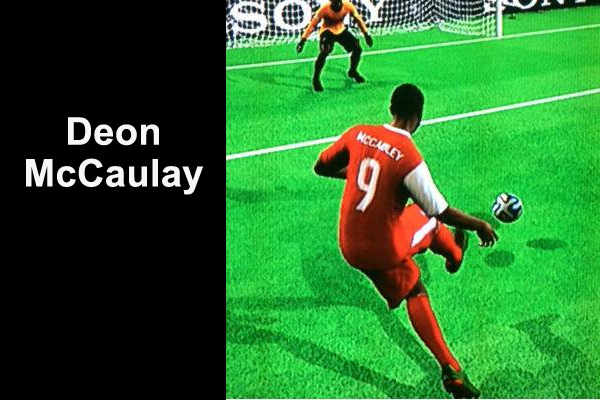 Belizean footballer superstar, striker Deon McCaulay, has been making waves on the international scene since being hired to play for a US soccer team known as the Atlanta Silverbacks, and his latest engagement involves being featured on a new FIFA World Cup video game titled “2014 FIFA World Cup Brazil.”

McCaulay, 26, who is the all-time leading scorer for the Belize National Team, went to the U.S. to play in the North American Soccer League in March 2014, after being one of only three players in the entire world to score 11 goals during the qualifying rounds for the 2014 FIFA World Cup tournament.

According to the Atlanta Silverbacks’ social media page, forward Deon McCaulay from Belize and goalkeeper Derby Carrillo from El Salvador are among the players that can be utilized in the new 2014 FIFA World Cup Brazil video game.

The football simulation game – which was developed by EA (Canada) and published by Electronics Arts – was released on April 15, 2014, in North America, in Europe and Australia on April 17, and will be released today, April 24, in Brazil and Japan.

Deon McCaulay made history when he equaled the goal-scoring totals of football superstars Robin Van Persie and Luis Suarez by scoring 11 goals during the last qualifying cycle for the 2014 World Cup games, and since joining the Silverbacks, he has scored at least 4 goals in pre-season matches.

While making his mark and starting a new chapter in his career, the young Belizean international footballer was also recognized by FIFA in an article which highlighted his struggles and triumphs before going to play professionally in the United States.