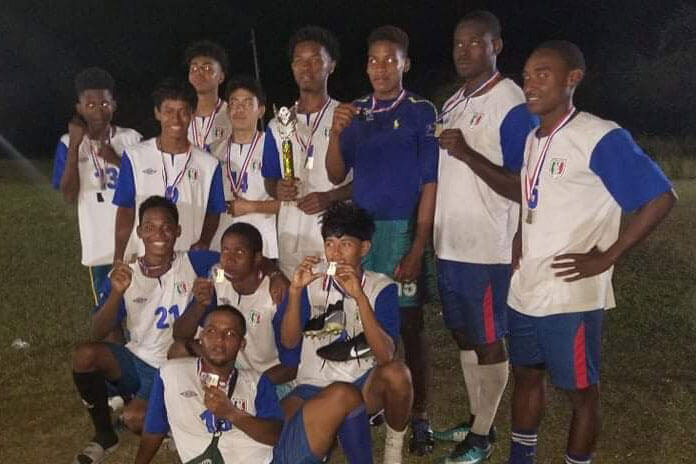 The afternoon began at 1:00 p.m. with a kids game, where children from ages 2 to 12 years had fun playing, as Lucky Strike Juniors won, 4-0, over Santana Juniors.

Next at 3:00 p.m. was the 3rd place game in the Old Road Classic, where Pasadita prevailed, 2-0, over Old Road Veterans.

Then at 5:00 p.m., it was the big championship final between #1 seed Lucky Strike Sr. (16 points) and #2 seed Rookies (also of Lucky Strike, 13 points). The game ended with a 2-2 score in regulation time, as Rookies got first half goals from Travis Heredia (8’) and Augustine Smith, Jr. (31’); while Lucky Strike Sr. came back in second half with a goal from Fredu “the Nigerian” along with an own goal by Rookies (65’ OG). The game then went to overtime (10-10), and again it ended in a tie, as Keanan Gillett (8’) put Lucky Strike Sr. in front, and Travis Heredia (17’) equalized for Rookies, resulting in a 3-3 tie at the end of overtime. And in the ensuing penalty shootout, after 7 rounds of shootout, it was Rookies coming away with the 4-3 victory.

Rookies are therefore the 2020 Champions of the Dickie Hernandez Old Road Classic.

Travis Heredia is the MVP of the season with 11 goals in regular season and 2 goals in the Final.

1st Place – Rookies received a cash prize, trophy and medals, and a cake from Jessica Hernandez.