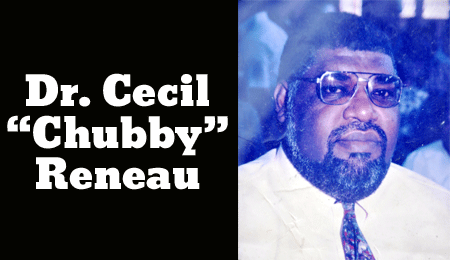 Heather Reneau, Dr. Reneau’s only daughter, told Amandala that her father had been ailing for some time and had suffered a massive stroke last August.
“He had three strokes prior to this one, but this one was mild, compared to the one last year,” said Heather.

Heather said that prior to Dr. Reneau becoming Belize’s Chief Education Officer, he was the principal of Belize Technical College for a number of years and served in various public service capacities.

Heather said her father was a technical student and studied for his doctorate in education at Bowling Green, Kentucky, at the University of Western Kentucky. Dr. Reneau also studied at other universities in the United States and in England.

“He got numerous awards for his studies in education,’ Heather said. “Education was his passion, because he believed that the only way we could get out of any situation that we were in is through education. Each one, teach one — that was his philosophy,” Heather explained. “You do not have to have a degree, but you can pass on what you learned,” she recalled him noting.

“Like my dad had a doctorate degree, but everything wooden in this house he built. He was very good with his hands,” Heather said.
Dr. Reneau was the son of Roland Reneau and Alice Ewings-Mossiah. He was born on March 9, 1950, in La Ceiba, Honduras, and grew up with his mother and stepfather, Clarence Mossiah, at their family home on Victoria Street, in Belize City.

His only sister in Belize, Suzette Mossiah, said that, while growing up on Victoria Street, he had various nicknames, such as “Frantz, Chubby, and Fat Boy.”

“He was my older brother and I admired him for his tenacity and his wisdom. One thing I can say about him, he thinks very cautiously before he did anything,” his sister said.

Heather said that when her father decided to enter the race in the municipal elections, “it showed all of us, his family, his children, the passion that he had for the country. He entered everything wholeheartedly, with full spirit and vigor.”

Heather said her father will be remembered as a robust man who was always willing to give advice and was always smiling. “He is always there to help,” she said.

Dr. Reneau is survived by his wife of forty plus years, Nina Esme Coleman-Reneau, his sons Frantz and Erwin Reneau; one daughter, Heather Reneau; three granddaughters, his sisters Suzette and Pamela Mossiah and other brothers from the Reneau side of his family, residing in the United States.