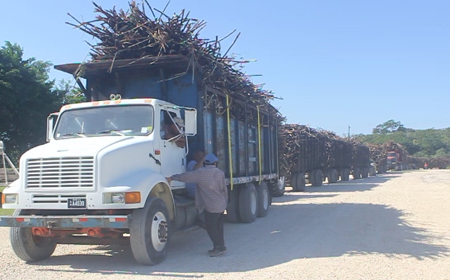 BELIZE CITY, Thurs. Jan. 9, 2020– Last year some areas of Belize were hit by a prolonged drought that has wreaked havoc on the agriculture sector of Belize’s economy. One such area that was hit hard by the drought was the Orange Walk District, where cane farmers have lost millions of dollars.

This year’s sugar cane harvest has been projected to be 30 percent less than last year’s harvest. This is a loss to farmers that is in the millions of dollars, not to mention the effect it will have on the national economy.

Notwithstanding the setback, this week the BSI/ASR factory at Tower Hill, Orange Walk, is scheduled to start grinding cane on January 15.

This week, the startup date for the 2019/2020 sugar cane season was agreed to, after a meeting with millers and four cane farmer associations.

The drought has resulted in an estimated 30 percent decrease in sugar production for this season.

ASR/BSI’s Manager of Cane Farmer Relations, Olivia Avilez, told News5 that the forecast is for low production and low cane quality this year, but the industry stakeholders are going to make the best of it.

“The entire industry is under an impact of severe drought and stakeholders had to make a decision to start a little bit later because we didn’t have sufficient cane that would be ready or of good quality to start the crop season. So we did meet in November and we had to make that tough decision, but here we are. We are going to start even though we forecast a low production year and a low cane quality year; we are going to work hard to get this season as successful as it can be.