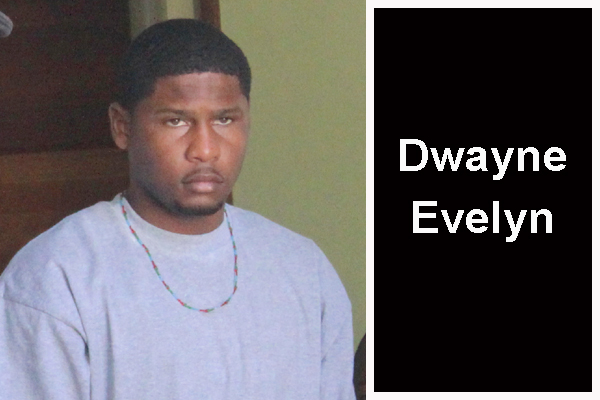 Dwayne Evelyn, 22, a resident of Amarillo Street, was acquitted of murder this evening after a jury of 3 men and 9 women unanimously found him not guilty of killing Peter Myvette, 22.

At noon on February 17, 2010, shots rang out at the corner of Tigris Street and Kut Avenue, and when the noise stopped, the scene that residents of the area beheld was the body of Myvette under a bus, bleeding profusely from multiple gunshot injuries.

Myvette was immediately rushed to the Karl Heusner Memorial Hospital, but was declared dead on arrival. He had suffered injuries to his neck, arm and rib cage.

Two days later, Evelyn was charged with the murder of Myvette in the Magistrate’s Court. According to police, they had a witness who saw the shooting, and a police officer who claimed to have critical information on the murder and the person who allegedly did it.

That person, he said, rode up on a bicycle in the area, threw down his bike, pointed and fired the gun at Myvette, who at the time was washing a bus. He said he heard about 6 or 7 shots being fired and that he saw when Myvette fell to the ground.

After Myvette fell to the ground, the shooter then got back onto his bike and rode off.

Sgt. Nicholas Palomo was the police officer who played a critical part in this trial, as he had reported that at noon that day, he was driving his car on West Street and parked it only a short distance from Kut Avenue. As he exited the vehicle, he heard what he thought were shots being fired, and ran toward the sounds.

When he arrived at the corner of Kut Avenue and West Street, he looked back and saw a male person riding a bicycle on Allenby Street, heading toward West Street. According to Sgt. Palomo, he recognized the person to be Evelyn, and observed him throwing down a black mask and a red cap.

Sgt. Palomo also testified that when he saw Evelyn riding the bike, he was wearing a white shirt and dark colored pants.

This is a contrast to the testimony of the first witness, who testified that the person he saw firing the shots at Myvette was wearing a black shirt.

Sgt. Palomo’s testimony also conflicted with what he had written in his statement about the incident when it occurred. In that statement, he never mentioned that he saw Evelyn’s face; that only came out in his testimony at the trial.

After Kaysha Grant, who represented the Crown, closed her case. Evelyn, who was represented by SC Simeon Sampson, gave sworn testimony in which he told the court that at the time of the shooting, he was not even in that area. He said “I was at home assisting my mother and then went to take a bath and went to sleep.”

The jury, after hearing the case summed up by Justice Adolph Lucas, Sr., retired to deliberate at 11:42 a.m., and returned at 4:16 p.m. Their decision was an unanimous not guilty plea.

With that, after being told not to spend another second where he was by the judge, Evelyn quickly exited the court room, a free man.