Ernesto Vasquez, 19, remanded for the murder of Herbert Bodden, 29 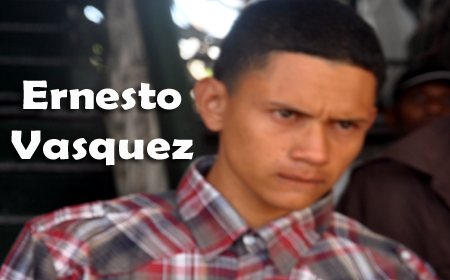 BELIZE CITY, Mon. Mar. 2, 2015–A teenager who has been in police custody since Thursday following the senseless murder of car cutter Herbert “Herby” Bodden, 29, of Tubruce Street, was brought to the Magistrate’s Court this afternoon to be arraigned on a charge of murder.

Ernesto Viron Vasquez, 19, a student and resident of 1386 Antelope Street Extension, did not have to enter a plea when he appeared before Magistrate Herbert Panton, because police charged him with murder, an indictable offense that will be tried in the Supreme Court.

On Thursday, February 26, around 1:30 p.m., Bodden was in Kevin’s Vehicle Scrap Yard, on Cedar Street, when a man known only as “Alex” was sitting on a car.

A gunman came into the yard, presumably targeting Alex, but Alex, according to reports to Amandala, saw the gunman before he began shooting at him. The gunman missed, and Alex ran to safety, leaving the gunman in the yard.

The gunman then turned his attention to Bodden, who was chopping up a car in the yard. He fired several shots at Bodden, hitting him multiple times.

Bodden was transported to the Karl Heusner Memorial Hospital Emergency Room, where a doctor pronounced him dead on arrival.

Outside the courtroom, Vasquez’s distraught mother, Gloria Karr, 46, told Amandala that her son could not have murdered Bodden, because he was at his mother-in-law’s house on Facebook.

“He has been in police custody from Thursday, more than 48 hours. We are trying to get him out, but we cannot get him out, because they charged him for murder.

“My son was at Miss Dawn house on his Facebook and everybody see him on Facebook. My son was not where this murder occurred,” Karr said.