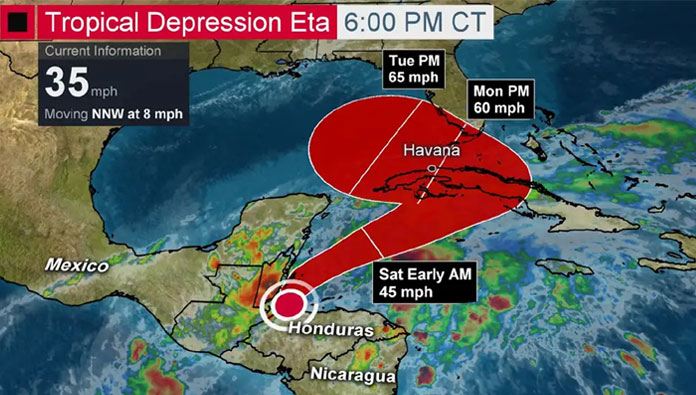 BELIZE CITY, Thurs. Nov. 5, 2020– Eta, which began as a tropical depression on Saturday, October 31, had, by the next morning, Sunday, November 1, become a tropical storm.

Later that same day, Sunday, Eta strengthened quickly, and early the next day, Monday, November 2, Eta had become a hurricane.

That Monday night, Eta swiftly gained strength and became a powerful category 4 hurricane, making it the second most intense November hurricane on record, behind only the 1932 Cuba hurricane, according to a Wikipedia page about historical storms.

Hurricane Eta, however, slowed tremendously off the coast of Nicaragua early on Tuesday morning, November 3. The storm weakened a little, but remained at Category 4 strength as it made landfall south of Puerto Cabezas, Nicaragua, late that same day, Tuesday. The storm degenerated once Eta’s center was disrupted by Central America’s mountainous terrain, and Eta rapidly weakened to tropical storm status early on Wednesday, November 4.

Eta was a tropical depression this morning, Thursday, November 5, and is beginning to turn toward the Caribbean while still affecting Central America. Its projected path is to Florida, after it curves back into the Caribbean Sea, near southern Belize.

Fox 35 Orlando said this evening that Eta is expected to regain tropical storm strength on Friday, and that Florida is still in its path. The Orlando Sentinel said that as of Thursday morning, Eta had maximum sustained winds of 30 mph and is moving slowly through Honduras at 9 mph, according to the National Hurricane Center’s 10 a.m. EST update.

Upon re-entering the water, Eta is expected re-develop into a tropical storm. It’s then expected to pass over Cuba and approach South Florida on Sunday or Monday as a tropical storm. The current track has Eta hugging Florida’s southwest coast.

Eta’s turtle-like speed caused great problems in Nicaragua on Wednesday by bringing heavy rains and causing deadly landslides while drenching the areas at the east and north, including in Honduras.

The Sentinel said that heavy rain was forecast to continue across Honduras through at least Thursday as Eta moved northward toward the capital of Tegucigalpa and the northern city of San Pedro Sula, according to the Associated Press. Before the center of Eta reached Honduras, hundreds of people had been forced from their homes by floodwaters.

Eta’s death toll is currently four persons thus far, including a 12-year-old girl who died in a mudslide in San Pedro Sula and a 15-year-old boy who had drowned while trying to cross a rain-swollen river.

Life-threatening surf due to swells produced by Eta, are expected to impact parts of the Central America coast and the Yucatán Peninsula of Mexico over the next few days.

Eta is the 12th hurricane of the year. Only three other full Atlantic seasons on record have seen 12 or more hurricanes: There were 12 during the 1969 season, 15 in 2005, and 12 in 2010, according to Colorado State University hurricane researcher Phil Klotzbach. Klotzbach also said Eta joined Hurricane Laura as the strongest storm of this season.

It is the 28th named storm of the year, tying the 2005 season record for 28 storms of tropical storm strength or greater.