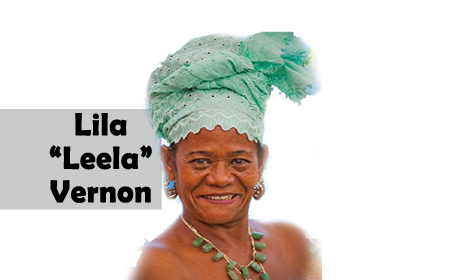 Presented at her official funeral and mass of thanksgiving held on Thursday, March 2, 2017, at the St. Peter Claver Church, Punta Gorda.

If I was half as brave as Leela, I would have sung that!

I was honored to have been asked to read the eulogy for this wonderful, strong and brilliant lady, Leela Vernon. Leela and I have a shared passion for our country that was reinforced by our many chats together. During our many times together, Leela would always call me Wil as we joked and told stories. But as soon as the topic was Guatemala and their unfounded claim to Belize, I would become Mr. Maheia, to her! She would say “Mr. Maheia, I like wat yu di do with that Sarstoon thing; but be careful, yu hear, an noh stap tell them politicians bout dem self! This country dah fu we and we noh need no ICJ fuh tell we that.”

Leela Vernon, MBE, was born to Mr. Alfredo Martinez and Mrs. Gladis Genus on October 21st, 1950. Leela spent her childhood days in many small villages in southern Belize with her parents but by the age of five she was living with her grandparents and with her other siblings, Mr. Denroy Genus, Mr. Junior Tillett, Mrs. Morna Tillett Johnson, Mrs. Ida Genus, Mrs. Sonia Tillett Morrison, Mr. Henry ‘Pleck’ Genus, Mr. Dean Martinez, and Miss Consuelo Aguilar. She forged lifelong friendships with all her cousins, the children of her Aunt Evelyn Genus Foster and the children of her uncles, Henry, Milo, and Cyril Genus; people who became her most loving and supportive friends to the end of her days.

Her grandparents “Pah G” and grandmother “Matha”: Mother G taught her about the power of the land. Their pioneering spirit opened Columbia Village from which their table was filled with fresh produce every day — a natural way of life. It also taught her about independence, productivity and originality.

“Miss Lila”, “ Aunt Lila”, “Lady Vernon” or simply “LEELA —QUEEN OF BRUCKDOWN”, went to St Peter Claver School and High School in Punta Gorda Town. She started her early life, with her first husband, Mr. Mario Vernon, for whom she had four amazing kids: Juliet, Mario, France and Andre. After her husband passed away she had another wonderful child, Danika Sierra, for Mr. Narmo Sierra of Mango Creek, Monkey River area. It was around this time that Leela`s creativity bloomed as she became 100% devoted to the promotion of the Creole culture. She was moved to do something about the need of the Creole people and to find a way to immortalize their songs, culture, food and way of life.

She was the cofounder of the first Creole Council of Belize at her home at # 6 Front Street, or as we know it, Leela Vernon Street, in Punta Gorda, with Mrs. Juliet Vernon Austin and Mr. Wilfred Neal. The now Governor General of Belize, Dr. Colville Young, was their first advisor.

During this time her family was growing bigger; her home was a virtual, hardworking United Nations headquarters where people from all nations, religious beliefs, political views, and nationalities could become a part of her family. She was the mother figure for many a lost soul, down on their luck with empty stomachs and pockets. The only criteria for entrance was love and respect. Mr. Peter Nunez, Mr. Lloyd Fuller, Mrs. Elodia Baldwin, Delone Sanchez, Miss Brady Mayasia, Mr. Christopher Nisbet, Mr. Allen Zuniga “ Stuff toys” … all became a part of that family.

The Ebolites was another passion that sparked her fire. As she gained more knowledge of her African heritage and Belizean history, she knew she had a story to tell and a mission to accomplish starting with the children. This dance group, Ebolites, was the first vehicle that she created. It was discovered by the nation in the first “Belize Games” in 1991, when she did her rendition of her original song” Ah Wah Know Who Seh Creole No Gàh No Culture”, with the Ebolites as backup. The nation bowed down and literally wept to her truth and honesty that night. Hèr voice, her presence, and her unforgettable message of love, recognition, unity and patriotism could not be missed and they began to love her for that. The members of the Ebolites were exposed to great authors such as Mr. Ulatungie Bologan, who was like a surrogate father to some; to national and international artists, historians, and Belizean history makers like Silavanna Udz of Creole Gial Productions and Brother David Obi, another Creole activist of Dangriga; and the young Yasser Musa, budding artist; Ministers of government from all political parties, even the Queen of England. The Ebolites travelled the world and made history, uniting children from all cultures under the Creole and Belizean flag. The Ebolites dance group became a stepping stone for many young Belizeans to become accomplished dancers, but just as important, to become comfortable in their culture and confident as they continued to navigate through life.

Miss Lila was recognized for her work through numerous awards over the years, including Woman Entertainer of the Year, and awards for several Bruckdown competitions with her children, as well as a few with Mr. Narmo Sierra and her brother Henry Martinez, and her Ebolites dance group. “Miss Lila” earned an MBE from the Queen of England for her timeless support of the Creole culture and her social activism in Belize in 1986. She was also named a National Hero by the National Institute of Culture and History of Belize in 2016. One of the highest points in her life was when PGTV and KREM agreed to collaborate with her to record the Belizean national anthem in Creole … there was no happier soul than Ms. Leela when it was finally released.

She was a songwriter, choreographer, historian, cultural promoter, singer, dancer, teacher, entertainer, philosopher, prophet, national icon, mom, sister, cousin, auntie … who gave her all. As we say goodbye today to this woman extraordinaire we need to remind you that, with all these accolades, her greatest accomplishment was as an inspiring and powerful mother who loved her children with all her heart and defended their future with all her life.

So, who seh Creole no gat culture? Through her songs and dance and lectures and dress and sheer force of will and an indomitable spirit, Ms. Leela proved that the Creole culture was alive, strong and vibrant.

Your work here is done, Miss Leela; your legacy, intact for the world to enjoy. Rest in peace, “Our BELIZEAN HERO”. You are now free.