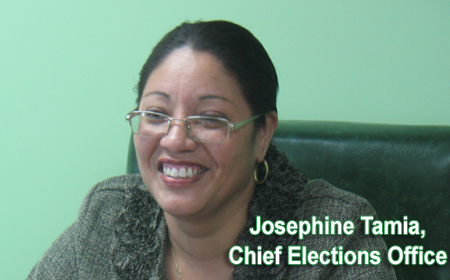 BELIZE CITY–Supreme Court Justice Courtney Abel is this week perfected an order issued on Monday, November 24, appointing Chief Elections Officer, Josephine Tamai, as receiver to conduct and oversee the election of a new executive council of the Belize Ex-Services League, as a result of litigation lodged in the court by sparring factions of the League, principally the Belize City branch and its executive arm.

Sources within the League have informed us that since the court handed down its ruling on Monday, the executive, led by retired Belize Defence Force captain, Bernard Adolphus, has stepped down in compliance with Justice Abel’s order.

The Supreme Court’s order restrains the outgoing executive council from managing and administering the affairs of the League.

The Belize Ex-Services League, which is an organization founded for World War II veterans, should hold elections every two years, and the last one was held in April 2012 – which means that elections are 7 months overdue. However, we understand that the executive and the Belize City branch, which have had a long history of clashes over the use of Canada House, the League’s local headquarters on Newtown Barracks in Belize City – a popular fundraising venue for the organization, could not agree on how the elections were to be carried out. The court had ordered elections several months ago, but the parties have been at odds over who would be entitled to vote.

Naima Barrow, attorney for the Belize City branch, had petitioned the court last month, asking for the court to appoint Tamai to conduct the elections. Barrow said that Tamai had indicated that she would be willing to take up the task, if the court were to agree.

On Monday, the court approved the request lodged by Barrow, appointing Tamai as receiver of the Ex-Services League.

Barrow told us today that they are looking at December to hold the elections. She said that she expects the court’s order to be perfected tomorrow, Friday, and Tamai should assume control over the League’s operations early next week.

Tamai has the liberty to apply to the judge for directions on exactly how to proceed, she added.

The former executive must refrain from acting until new elections are held, Barrow told us.

The continued care of 11 veterans of World War II and 14 widows who receive regular assistance is a concern. Through the headquarters in Canada, the Royal Canadian Legion, needy veterans and widows in Belize receive regular stipends every two months, as well as medical assistance and personal care packages distributed by the administration of the League.