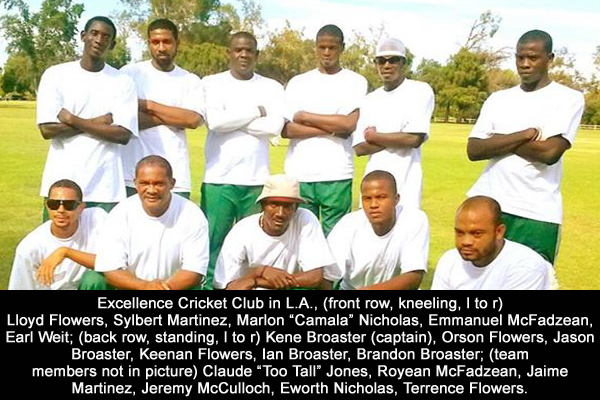 Leaving Belize by bus on Thursday night, August 29, for Cancun, Mexico, en route to Los Angeles, California, was the Excellence Cricket Club of Double Head Cabbage, cricket champions of Belize, and from reports received, they gave a great performance for the fans in L.A.

As we reported in the Sunday, September 1, issue of Amandala, in the article, “Excellence off to L.A. for cricket Friendlies,” the trip was “by invitation from the Cal-Bel Cricket Club of Los Angeles, and the Excellence team plans to play two friendly cricket matches on September 1 and 2 at the Woodley Park Cricket Complex as part of the celebrations for the Independence of Belize and Labor Day in the U.S.

“The Cal-Bel Cricket Club was founded in 1980 by Belizeans who formerly played cricket in Belize, and is a member of the Southern California Cricket Association. Last year, they hosted the Belize National Cricket Team; this year, they are hosting the recently crowned back-to-back national champions, Excellence.”

Yesterday, September 10, we received the following report from Excellence player/coach Sylbert Martinez in Los Angeles, California, and we couldn’t say it any better, so here goes Sylbert’s report from L.A.:

“Then on Monday, September 2, Excellence Cricket Club of Double Head Cabbage defeated a high powered 11 from the Southern California Cricket Association, 154-144, with 3 overs remaining from a 40-40 overs match. Jason Broaster was the high man (for Excellence) with 35 runs. Keenan Flowers had 20 runs, Lloyd Flowers, Jr. scored 19, and Sylbert Martinez also added 19. Camala and Kene took 3 wickets each. The end came when Jason stumped the 10th wicket on a run-out play, and all the Belizean American fans stormed the pitch with their Belizean flags to celebrate with us.

“We were told by everyone that with only 154 runs, we did not even stand a chance to compete. The game was like a see-saw style until when we really turned up the defence and locked them down. We then had the presentation of trophies and awards. No one wanted to leave Woodley Park. The players and the fans said they have never seen this kind of defence before. No team was able to win with a score of under 200 runs.

“I want to thank the Southern California Cricket Association and the Cal-Bel organization for the warm invitation to take part in the tournament. This is a historic event to have the National Champ representing and making our country, Belize, proud. Also, to the Martinez family – Doreth, Yvette and Marcel, for housing Excellence CC while on tour in Los Angeles, California. The treatment was so great, and to everyone back home who helped in any way to make this trip possible – We love you all.”

“From Sylbert Martinez in L.A. Thanks!”