Faber vs Saldivar on Sunday 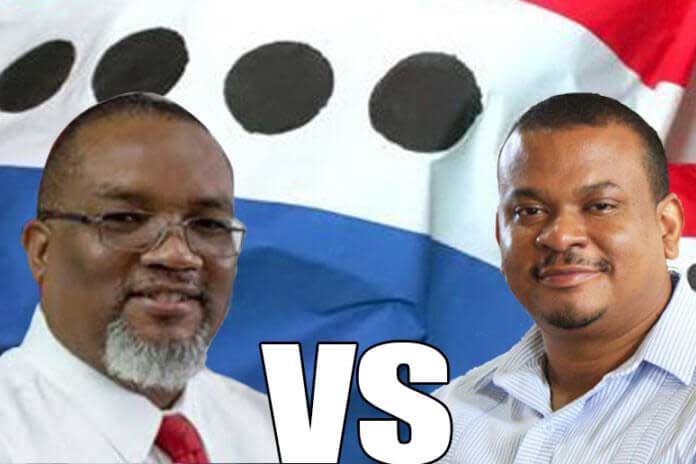 BELIZE CITY, Thurs. Feb. 6, 2020– The United Democratic Party (UDP) will make political history in Belize on Sunday, February 9, when 570 delegates, chosen from among all 31 electoral constituencies, decide which of the two candidates vying for leadership of the party will be the new UDP leader.

The governing UDP will also make another kind of history, because the independent media will not be allowed inside the Belize City Center, where the convention will be held. The media will be banned from the convention until after the party has conducted its business of carrying out elections and setting party policy in the form of motions.

Since the UDP’s formation in 1973, this is the first time in its history that the party will elect a new leader. In the past, the new leader of the party would emerge after a general election defeat, this was with the exception of National Hero, Hon. Philip Goldson, who was replaced by Dean Lindo. When Lindo lost his seat in the Fort George constituency, Dr. Theodore Aranda, who was elected in Dangriga, succeeded him as UDP leader.

Also, for probably the first time since it was swept into power in 2008 on the coattails of the media, the UDP may be experiencing media-fatigue due to all the scandals surrounding the party in this election year.

In the case of Hon. Faber, who is the Deputy Prime Minister and Minister of Education, Youth and Sports, two recently tabled Auditor General Reports on two entities that fall under ministries in his portfolio, have cast their shadows on his ambition to lead the party.
In the case of Hon. Saldivar, the Minister of National Security, a fraud trial in Salt Lake City, Utah, has cast a shadow on his leadership ambition after his name surfaced in court documents which indicate that he had a close relationship with one of the accused fraudsters and had exchanged a number of text messages which will most likely become evidence in the US District Court in the massive fraud trial.

Saldivar has come a long way in the UDP, however, since he was demoted from his Cabinet post as National Security Minister because of his association with William “Danny” Mason after Mason was arrested and charged with murder.

Mason was a business partner with Saldivar and is said to have invested thousands of dollars in his (Saldivar’s) football team. In addition, at Mason’s trial, a US federal agent gave testimony in which he stated that Mason had told him that he was being framed by Saldivar.

The UDP leader who emerges victorious on Sunday will have the task of re-unifying the party after the intense leadership campaign that is being played out in social media among their supporters.

The new UDP leader will also have only a few months to become battle-ready to face the voters at the polls in this year’s general election.

Outgoing UDP leader Hon. Dean Barrow indicated at his last press conference that he is ready to go into retirement, but circumstances may delay his retirement. It is for certain that Hon. Barrow cannot lead the party into the next general election after having amended the Constitution so that a prime minister can only serve for three terms.

Another highlight of the UDP convention will be the swearing in of the party’s new chairman, Michael Peyrefitte, whose political career reached a low point with his defeat in the Port Loyola constituency convention, when he was defeated by the former City Councilor, Philip Willoughby. Two other aspirants for the UDP chairman post stepped aside, allowing Peyrefitte to assume the post unopposed.