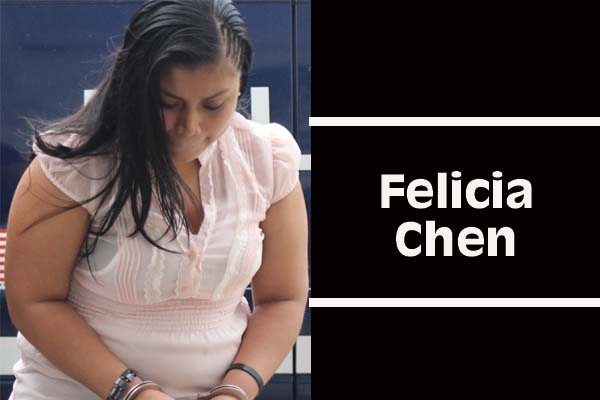 Chen attempted to plead guilty, but under the law, the court cannot accept a guilty plea for murder

Felicia Chen, 22, the young mother accused of drowning three of her children on April 27, arrived on the bus from the Belize Central Prison this morning, and later took her place in the prisoner’s dock in the Supreme Court of Justice John Troadio Gonzalez, who read the three murder indictments to her.

Chen, who appeared unrepresented by an attorney, attempted to plead guilty to the three counts of murder, but Justice Gonzalez explained to her that the Laws of Belize do not allow for guilty pleas in murder indictments. The case has to be tried, and a person accused of murder has to be represented by a defense counsel. If an accused murderer cannot afford an attorney, the state has to provide one.

When Chen was first arraigned in the Magistrate’s Court on the murder charges, she was represented by Senior Counsel Antoinette Moore. But Moore was recently appointed a temporary Justice of the Supreme Court, and is presently presiding over the Southern Session of the Court; she therefore is unable to continue representing Chen at this juncture of her case.

Justice Gonzalez has advised Chen to retain the services of another attorney.

Felicia Chen, on the morning of Saturday, April 27, 2013, took her four children on a bus from their home at the Mile 8 community on the George Price Highway. She was heading for the shores of Belizean Beach, about four miles away.

They reached the beach, but the lifeless bodies of three of the children would later be fished out of the water after the oldest child, a six-year-old girl, alerted a resident of the area to the tragedy that she had just witnessed, and escaped from.

Chen, who had failed in an attempt to drown herself after she had allegedly drowned her children, was taken into police custody and charged for the unlawful deaths of her three children.

Initially, when Chen was making her first rounds in the court system, she was afforded special protection by the state; court reporters were barred from the proceedings at the Magistrate’s Court and, with her face covered, she was provided with a special escort to and from court, which made photographing her a challenge.

But all of those trappings of state protection were not evident today, as her conveyance to court lacked any special features and she was escorted back to the Magistrate’s Court holding cell to await the return journey to Hattieville, along with the other prisoners who had appeared in court today.

Chen was transferred to the remand section of the Belize Central Prison after she had spent about five months undergoing psychiatric care and was declared fit to stand trial in September, 2013.

DANGRIGA, Thurs. Apr. 2, 2020 -- A house was completely destroyed by fire at about 1:30 this morning and another house in its close...
Read more
- Advertisment -

Dear Editor, The lockdown of the entire society with restricted movement only slows down the spread, but it cannot stop SARS-Cov-2, the virus that causes...
Read more

Neighbors heard the shooting, but heard or saw nothing else LADYVILLE, Belize District, Thurs. Apr. 2, 2020-- There was an early morning shooting in an...
Read more

LIBERTAD, Corozal District, Mon. Mar. 30, 2020-- Six men have been detained in Libertad, and charged with drinking in public and disobedience of the...
Read more

Dear Editor, The world as we once knew it, say three months ago, is not the world we see today, which is now a much...
Read more
Load more