Home General Felix brothers to be tried for murder
General

Felix brothers to be tried for murder 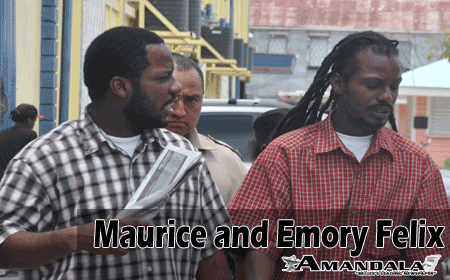 BELIZE CITY, Tues. Apr. 19, 2016–Maurice and Emory Felix, two brothers whom police have charged for the May 2015 shooting death of Mark Gentle, made their last trip to the Belize City Magistrate’s Court this morning, along with their attorney Arthur Saldivar, for the continuation of the preliminary inquiry into the case against them.

After going over the paper evidence that police had put together to make their case against the two brothers, Senior Magistrate Sharron Fraser ruled that the two have a prima facie case to answer at the Supreme Court, where they will be indicted for Gentle’s murder in the June session of the court.

Maurice Felix, 30, and his younger brother Emory Felix, 29, had only enjoyed being on the outside for a few months after they were released from prison, where they had spent more than eight years on remand for the 2006 murder of Mitchum Heredia, a mechanic who was gunned down as he worked on a car in the Port Loyola.

The Felix brothers had been tried three times in the Supreme Court for Heredia’s murder. In the summer of 2014, the office of the Director of Public Prosecutions entered a nolle prosequi in respect of Mitchum Heredia’s murder, thus paving the way for the release of the Felix brothers, whose last trial ended in a hung jury in the Northern Session of the Supreme Court.

On the evening of May 25, 2015, Mark Gentle was at his home on Caesar Ridge Road, along with his mother and stepfather, when a vehicle drove up and two men opened fire, hitting Gentle and his stepfather, Calvin Cumberbatch, 35. Gentle’s mother, Pamela Cumberbatch, was not hit by the barrage of gunfire from the two men.

Shortly after the shooting, police charged Emory Felix, and his brother later turned himself in. Later, the charge of attempted murder was upgraded to murder after Gentle died about one week after he was shot.