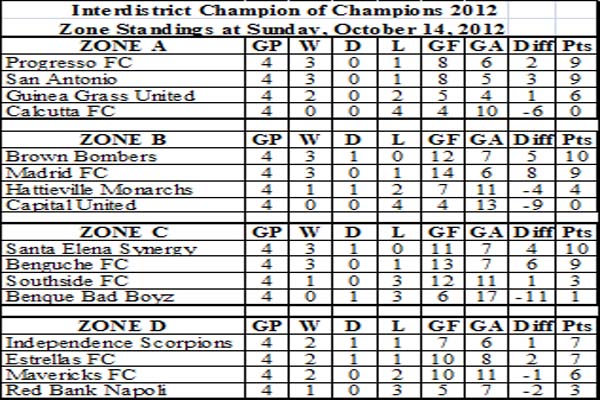 In its original incarnation back in the 1970’s, the Interdistrict Champion of Champions competition featured the best players representing their respective district selections in a battle to determine the best in the country of Belize. Today’s star players are mostly active in the semi-pro Premier League of Belize; “Interdistrict” teams are therefore now comprised of a combination of undrafted veterans, including a few former stars, along with some young developing amateur players. The games are still entertaining, but lack the high standard and drama of the original “Interdistrict.” Nevertheless, it’s a chance for some new talents to develop and emerge, and the competition is getting interesting as teams battle for the 2 playoff spots in each group. Here are the results of the Week 4 Interdistrict games played over the weekend.

Only 1 Interdistrict game was played on Saturday night, October 13, and it was at the MCC Grounds in Belize City where Brown Bombers handed visiting Capital United from Belmopan a 5-2 whipping. Jahron Myvette (10 min), Jermaine Foster (19 min), John Castro (32 & 74 min) and Kadeem Myers (46 min) shook the net for the Bombers; while Jevron Aranda (11 min) and Dion Frazer (87 min) scored for the visitors.

It was a 2-2 draw at the Toledo Union Field, where Christopher Burke (17 & 86 min) got both goals for Estrellas FC, while Devaughn Thompson (49 min) and Jose Melendez (72 min) shared the scoring for Independence Scorpions FC.

Up north at the People’s Stadium in Orange Walk, Progresso FC clipped San Antonio FC, 1-nil, on a strike by Alexander Diaz (75 min).

And further north at the Ricalde Stadium in Corozal, Ian Sima (36 min) got the only goal of the game, as Guinea Grass United burned Calcutta FC, 1-0.

At the end of Week 6, which completes the double round-robin in each Zone, the top 2 teams from each Zone will go on to the quarterfinal playoffs. (See standings below.)