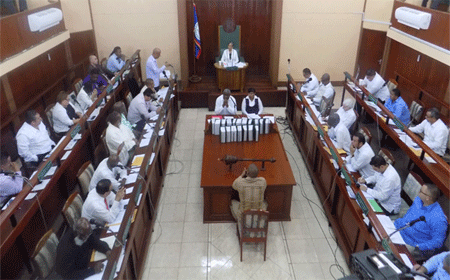 BELMOPAN, Cayo District, Fri. Dec. 8, 2017–The House of Representatives held its final meeting for this year today to debate a motion for a US $40 million loan from the Republic of China (Taiwan), and to carry out the second reading of several bills.

The loan from Taiwan is to be disbursed in four parts of US$10 million each, and is for budgetary support. It is a low-interest loan with a grace period of three years.

Prime Minister Barrow, in outlining the motion, explained, “This is simply another installment in the continuing economic cooperation program with Taiwan. Their loan and grant program is done in cycles of four years; the last four-year program has come to an end—this is the new four-year program. Unfortunately, there is nothing additional in the proposed disbursements, the proposed mix of loans and grants. But just to be clear, that it is what happens every four years in the Republic of China (Taiwan).”

Opposition leader John Briceño, in commenting on the motion, said, “Certainly, we wouldn’t have any problem with any country assisting and helping, and as the Prime Minister mentioned, this is just a continuation of the economic program with Taiwan. But the only concern, or what calls my attention—it seems that whenever we have elections that is when Taiwan is lending this government some money, just before the election. And I just wonder if this is not going to be called, what we would call election-time money, but as I said, forty million is forty million U.S. and we are not necessarily objecting to the loan.”

The Leader of the Opposition, Hon. John Briceño, remarked, “At the start of the bill, in the introduction of the bill, where they are talking to make further provisions for the protection of the Belize Barrier Reef, the recommendation is that we should add ‘inclusive of the World Heritage Site’, because the World Heritage Site is also a special status that has been given to Belize, and I am appealing to the Government and the members of the government side to consider just adding it, to highlight, not only to us in Belize but even to our international partners and friends and people that come to Belize, to make the point that it is so important that we are putting it into the legislation. I think that also, when we look at section three, where they are talking “notwithstanding the provisions of any other law’, again, the argument, which I think is a valid one, is made to include the Petroleum Act, the Environmental [Protection] Act, and any other law, because then we are specifying in particular when these are issues that have to do with petroleum, and also that it has a direct impact on issues of the environment. So again I am appealing to the Minister and his colleagues to consider making that slight amendment. It doesn’t take away, I think in my mind and the minds of many other people, it only strengthens.”

Prime Minister Barrow said, “Your committee considered the Bill and has agreed that it be returned to the House for its second reading with the following recommended amendments: ‘reef system’ inclusive of the words ‘World Heritage Site’ – what you asked for. They changed the definition of the Belize Barrier Reef System to make it more expansive. The committee went on – in terms of your central concern about the penalties, the punishments not being steep enough – they changed that fifty thousand and one-year imprisonment to two hundred thousand and five years’ imprisonment! That’s for individuals. In terms of entities, you’re talking about punishable on conviction now, by a fine not exceeding three million dollars.”

Following the House meeting, Prime Minister Barrow spoke to reporters about the 90 million dollars that the Caribbean Court of Justice awarded to the Belize Bank, which was not discussed at today’s House meeting. PM Barrow explained that the bank has a period of 21 days after the judgment to issue a certificate.

“We clearly are waiting until we get the certificate, which can only be issued 21 days after the judgment. But once that certificate comes, I think we will want to have a special meeting as quickly as is practical,” Barrow said.

The Prime Minister was asked if there is a time stamp once the government is served with the certificate or if the risk for him is imprisonment.

Barrow replied, “I don’t think so. We are quite clear that the monies have to be voted by Parliament. There are all sorts of arguments for the other side, as to whether Parliament’s vote in a certain way is obligatory. We’ve announced to you and to the world that once we get the certificate we will come to Parliament with the supplementary allocation. I don’t see that there is any risk that if we take a couple of weeks before we, in fact, summon a meeting, that that could be misinterpreted as a desire or determination on our part not to call the meeting at all. The meeting will be called.”

Barrow explained that the meeting at which he will introduce the motion for the 90 million dollars would be held no later than mid-January.

Belize Bank attorney Eamon Courtenay, S.C., has written a letter to Attorney General Michael Peyfefitte, telling him that as soon as the government gets the letter from the bank, the bank is expecting payment of the judgment debt.

Prime Minister Barrow was asked his reaction to Courtenay’s letter to the Attorney General.

“Well, first of all, that’s not his business. And in terms of my statement or my statements, I am very much aware of what I said, and I was aware when I was saying what I said. So, I dismiss that out of hand, certainly, with respect to myself. In terms of his saying to the Attorney General that he wants matters dealt with as soon as he comes up with the certificate, I am repeating, matters will be dealt with but not in the way he wants. There is clearly not going to be any payment unless and until the House votes to appropriate the money. He, and Allen, and Overy, can holler until the cows come home. I am satisfied that the state of the law, the state of our constitutional and statutory arrangements, is such that that money cannot be paid, cannot be extracted from the consolidated revenue fund, unless and until Parliament votes to so appropriate it. There is no doubt in my mind that depending on how Parliament goes, we clearly will be back in court, and I would say nothing about that.”