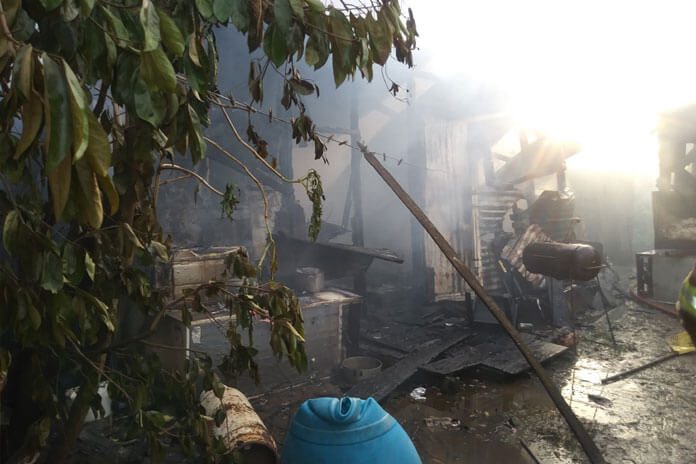 BELZE CITY, Thurs. Jan. 2, 2020– A fire at about 2:30 this afternoon destroyed four houses in a yard on Flamboyant Street in Belize City, leaving a number of persons homeless. On our arrival on the scene the firemen of the Belize National Fire Service were already in action, putting out the flames.

The cause of the fire has not yet been ascertained, but a senior fire officer at the scene pointed out an illegal connection for electrical power on a lamp post, and noted that the house to which it was connected did not have a meter.

When the illegal connection was pointed out, an aunt of one of the fire victims said the illegal connection did not necessarily cause the fire because the residents have been living with that connection for some time. She said she was taking a nap in her house when she was awakened and was told that the home of her relatives was burning and she came quickly to ensure that they were well. She said she panicked when she did not see one of her little relatives, but was told that the little girl, 7, was being taken care of by a neighbor.
A witness told us that a woman was sleeping in her house where the fire reportedly started when her mattress began to burn. A quick forced entry was made to get her out of the house, during which she got burn injuries on her arm. The woman was taken to the Karl Heusner Memorial Hospital, where she has been admitted in a stable condition.

The Belize National Fire Service is conducting an investigation to find out the cause of the fire that has devastated a number of hardworking families just one day after Belizeans celebrated New Year’s Day.

Feature photo: The remains of the burnt houses